UPPER MARLBORO, Md.--Scott Stewart of Flemington, N.J., rode the champions of every professional division for the second time at the Washington International Horse Show and won the Grand Hunter Champion title for the 12th time, this year a tie on Casanova Royal and Nottingham, and was Leading Hunter Rider on Oct. 25. 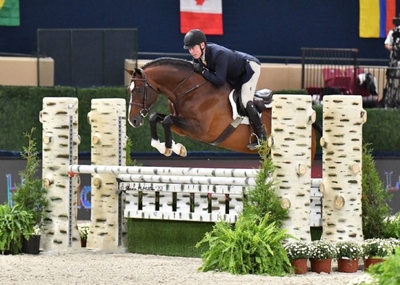 Scott Stewart on Casanova Royal (Photo by Shawn McMillen)“All the horses were really great,” said Stewart who rode seven horses in this year’s professional divisions. “I really couldn’t ask for anything better. I’m really excited. I’m really fortunate for every horse in my string, and they’re all really top.”

“He was an experienced jumper in Europe, so he has quite a bit of mileage in the jumper ring,” said Stewart of the flashy bay that arrived in the U.S. in April 2022. “I thought he was going to take a little more time to get the hang of the hunters, but he’s really straightforward. His owner Stephanie Danhakl is a really good rider, so she can also handle him even though he’s not quite used to doing this job. They’re a great combination too.”

STEWART rode Nottingham to three blue ribbons and a second-place finish in the High Performance Hunters with notable scores of 88 in the handy class and 92 in the stake class for the division championship and a tie for the Grand Championship.

“Nottingham is a great horse,” said Stewart of the 10-year-old Oldenburg gelding by Verdi. “He has such a good rhythm and is just so smooth between the jumps. He’s one of the best horses to ride.”

“It really means a lot to be named Leading Rider and Grand Champion at Washington,” said Stewart. “I’ve competed here a lot of years, and it’s always been one of my favorite horse shows. It’s all the best horses and riders here, and it was super conditions with great footing, so it was pretty high level competition.”

“I’ve been so fortunate with great owners through all the years helping me come along with all of these great horses," he said. "I think it’s great that we had two horses that went so well that we could tie exactly for Grand Champion! It’s nice that we didn’t have to choose.” 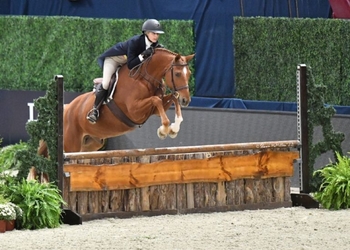 Barna was not sure she would be competing during the indoor season at all.

Just 10 weeks ago, she had a fall and fractured her hip, resulting in emergency surgery and her hip being pinned.

Though she feels physically comfortable, Barna is not quite back to 100 percent and is riding through the lingering challenges.

“That is just another facet of being so grateful for my horses, because I felt like he knew and he took extra good care of me at this show because I’m just getting back to riding now,” said Barna of her 15-year-old Westphalian gelding. “‘Milo’ has such a great personality. In the barn, he’s a real character. He loves to show off, and he loves to win. He really put his best foot forward tonight.”

Since Barna has not been able to ride since her accident until recently, her trainer Liz Perry of Pear Tree Show Stables in Ringoes, N.J., kept her horses fit and ready to win.

“I’ve been riding with her for 23 years, so this is a long venture with the two of us,” said Barna. “It’s super exciting to have it all come together and win on such a good horse and be so consistent tonight."

In the children’s class, Blasdell scored 84.5 in the first round on Talisman.

When the top 12 were called back for the second round, Blasdell of Portsmouth,, Va., was sitting in fourth, but a score of 87 shot her up the leaderboard and into the winner’s circle with a total score of 171.5.

“In the first round, Talisman was so good,” said Blasdell. “I felt like for some of my distances I sort of gave him mixed signals, but he was really super throughout the whole thing. The second round was even better. He was just perfect going around. He listens to everything I tell him to do, and I love him so much.”