HARRISBURG, Pa.--McLain Ward on First Lady won the $100,000 Grand Prix de Penn National after an exciting jump-off  in the last class of the Pennsylvania National Horse Show on Oct. 15. 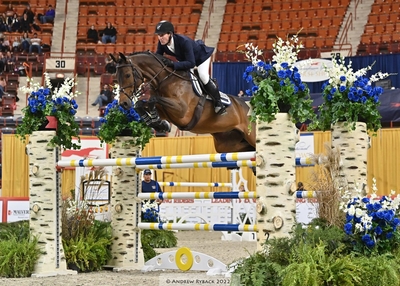 McLain Ward on First Lady (Photo by Andrew Ryback Photography)Thirty-four entries took on the challenging track designed by Andersen Lima, with the crowd erupting enthusiastically as, one-by-one, seven riders made it to the jump-off.

Ward on First Lady was the final rider in the jump-off, and the time to beat had been set at 34.883 seconds by Brazil’s Rodrigo Pessoa on Quality FZ.

Ward took advantage of going last and knowing the time to beat.

As Ward crossed the timers, spectators held their breath before breaking into applause when his final time appeared on the scoreboard as 34.638 seconds, just two-tenths of a second faster than Pessoa’s time.

Also qualifying two horses for the-jump off was Katie Dinan who was fifth on Brego R’N B, clean in 036.839, and sixth on Atika des Hauts Vents, 4 faults in 35.590, while Jonathan Millar of Canada was seventh on Isotropic Shadow with 8 faults..

“This place has kind of been a little bit of a nemesis for me!” said Ward. “I think I've done this grand prix about 30 times, and I've never won it, so this has kind of become a running joke between my friends and me. I finally got it, so that was nice! It's an incredible facility, always has been.”

Ward has ridden the 9-year-old Oldenburg mare, First Lady, for the past two years, but this week marked the pair’s first time competing together indoors.

“That’s one of the reasons we brought her here, to get her some experience and prep her for next season, and obviously she stepped up beautifully,” said Ward. “This is her last show of the year, so it was a great climax to her season. She's feisty but has a tremendous amount of quality; she's still inexperienced, but she has a lot of heart.”

The Leading Lady Rider Award and the Wissie Brede Memorial Challenge Trophy went to Laura Chapot for her top results throughout the week.