Christian Coyle won the 1.30m Grand Prix and the championship 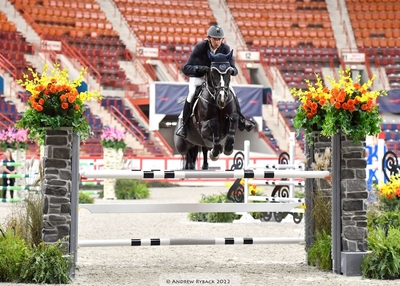 Christian Coyle on Locato (Photo by Andrew Ryback Photography)Coyle was one of 14 from the 30-horse field to advance to the Anderson Lima-designed jump-off course.

Coyle went 10th in the jump-off, and Alex Granato on Indio had set the time to beat 35.52 seconds, but Coyle stopped the clock in a lightning fast 33.75 seconds that would hold up for the win.

Granato placed second on Indio, and Laura Chapot on Gideon was third in 35.75 seconds.

“I just got Locato van het Kapelhof back off lease two or three weeks ago,” said Coyle. “He's a lovely horse; he’s naturally fast if you can stay out of the way and not make too many mistakes.”

“I think this is a brilliant show; it was lucky for us!” said Coyle, who showed first visit in Harrisburg last year and is now two-for-two on 1.30m grand prix victories at the venue.

Chapot on Gideon was reserve champion.

Webb on FVF Sailor Man won Friday’s $10,000 Amateur Jumper Classic for the second year in a row to also take the championship.

“It's always an honor to show here and ride here,” said Webb. “Since we won last year, it felt like extra pressure, but it all came together. It feels amazing; I wasn't so sure it was going to happen, but we managed to pull it off!

“I always ask this horse ‘Is this it Oliver? Do you think you've had enough?’ because he owes me absolutely nothing,” said Webb of the 16-year-old Dutch Warmblood gelding. “I've had him his whole life. I tell him every day how special he is. That's why it's extra special too.”