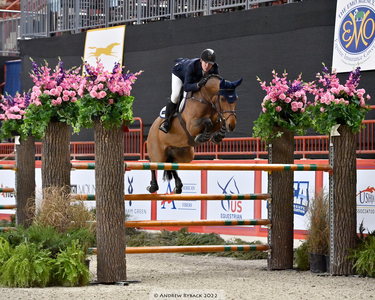 McLain Ward on Lezaro (Photo by Andrew Ryback Photography)Ward on Lezaro, fresh off a victory in the CSI3* Grand Prix of Greenwich in Connecticut two weeks ago, replicated the win to top the 33-horse field on Thursday night in Harrisburg.

Following the first round, Ward and Lezaro were one of 13 entries qualified to come back for the jump-off over a course set by Anderson Lima.

Chapot on Calafornia was the first in the jump-off, and despite the disadvantage of going first set a very fast 38.781 time to beat.

Ward, fifth to go in the jump-off, stopped the clock in 37.778 seconds to beat Chapot by a full second.

Mattias Tromp on Infuria P&P finished third in 38.786, just five one-hundreds of a second behind Chapot.

“I think the course designer, Anderson Lima, did a nice job here. It was a nice strong 1.45m with a couple 1.50ms, I thought it rode well, so that's a good sign for the class on Saturday,” said Ward, referring to Saturday night’s $100,000 Grand Prix de Penn National.

“THIS IS an incredible facility with obviously multiple rings and a lot of room for everybody, and it has a lot of history so it's always nice to be here,” said Ward.

Lezaro was sold by Ward to young rider Stella Wasserman early in the year, but after realizing it was not the perfect match, Ward and Susan Heller recently purchased him back.

“He’s a little bit of a finicky character – good quality but very sensitive,” said Ward, who will compete next at with Lezaro at the Washington International Horse Show, October 24-30.

Along with finishing second in the $30,000 Grand Prix, Chapot also won the 1.30m class on Thursday.

“I’ve had this horse since he was 6 years old, and it's been a lot of fun bringing him along,” said Chapot of Gideon. “He’s really my type of horse because he's got a lot of energy, and he's very careful at the jumps. I'm very excited for him to win this class today because it's been a long partnership now, and we really know each other well.

“I went early with C&C Willow, a 7-year-old who was fantastic, and she got beat twice, so I knew the jump-off was getting faster and faster,” said Chapot, who is a frequent winner in Harrisburg. “So, with Gideon I just figured I'd take a shot and see where the chips fell. I think they've done a great job at this show; it's really nice to have the two divisions – whether it be a young horse, or maybe a horse that's not quite up to the caliber of the bigger division – to have an opportunity to come and show here. This is the only indoor show we come to, and it’s the best one, that's why we come!”

Finishing in second place behind Chapot and Gideon were Canada’s Kelly Soleau-Millar on Favoriet U, and Christian Coyle on Locato van het Kapelhof was third.