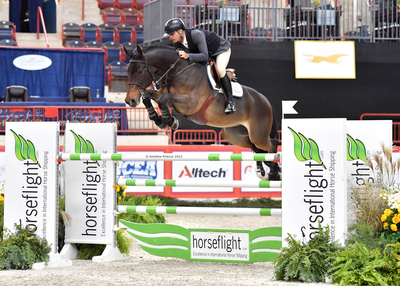 Rodrigo Pessoa on Venice Beach (Photo by Andrew Ryback Photography)Pessoa was one of 36 entries to take on the speed track set by course designer Anderson Lima.

As the third to enter the ring at the Farm Show Complex in Harrisburg, Pessoa on Venice Beach laid down a lightning-quick time of 54.583 seconds that would go untouched through the remainder of the class.

Coming the closest – but still nearly two seconds off of Pessoa’s time – was Adam Sklansky who stopped the clock in 56.49 seconds on his own Hakini, and in third with a time of 57.03 seconds was Olympic gold medalist McLain Ward on First Lady.

“IT WAS A good first indoors, classic course,” said Pessoa, who has won the Grand Prix de Penn National twice. “Everything comes up pretty quickly, and you have to adjust your reflexes a little bit from the outside arenas."

"Anderson Lima’s a very good course designer, very experienced," said Pessoa. "This is a place that I've always liked to come and compete. The facility is always really nice, and it's great to be back here.”

Pessoa has ridden the mare for several years and can always count on the her in situations like Wednesday’s featured jumper class.

Ireland’s Christian Coyle on Locato Van Het Kapelhof won the $10,000 1.30m Speed with a time of 53.53 seconds, and placing both second and third place was Laura Chapot riding Gideon and C&C Willow, respectively.