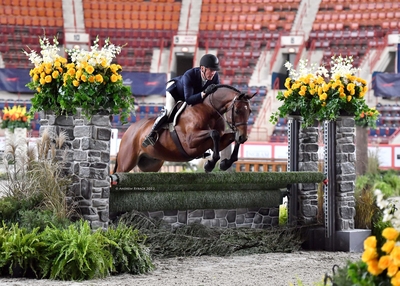 Scott Stewart on Jordon (Photo by Andrew Ryback Photography)Stewart on the 9-year-old Selle Français gelding had two wins and a third place over fences, a win under saddle and a second-place finish in the model to win the Green Conformation Hunter division championship.

Finishing as the Green Conformation Hunter reserve champion was another of Stewart’s mounts, Whimsical, owned by Gochman Sport Horse LLC.

“It means a lot because we work all year long to come here and compete against the best riders and horses,” said Stewart, of Flemington, N.J. “I've come here every year since 1980. It's a very special place for tradition and all of the trophies.”

Stewart was the Leading Hunter Rider.

STEWART has only ridden Jordan since August when the horse was initially purchased by Gochman, and he has already been division champion two out of their three times.

“Amanda Steege brought him along and did a great job,” said Stewart. “He’s not very big, but he has a big stride and a great jump. He’s really sweet and tries to do the right thing. Sometimes he tries a little too hard, but especially today he felt really relaxed and very comfortable.”

Stewart also rode Nottingham to a score of 93 in the Green Hunter 3’9” division to earn the Professional Hunter High Five Award for the highest score in the professional hunter divisions.

"Every time we ask him to be phenomenal, he is,” said Tosh. “He came here last year and was spectacular. He did it again this year. He’s a superstar.

“The whole horse show has been fantastic," saidTosh. "All the new upgrades and revamping everything; the venue’s fabulous. They gave us another ring this year which really made it so much easier, even with the equitation going on Sunday, it gave us a place to ride. You can’t say enough good things about what show manager Pat Boyle and his crew have done.”

The High Performance Conformation Hunter division championship went to Can Can, ridden by Christopher Payne, and reserve was Nick Haness on Estimated Prophet, owned by Roaring Fork Farms LLC.

Haness on Can Can was also champion in Green Hunter 3’9”, , and reserve was Stewart on Nottingham.

Daniel Geitner on Mr. Manhattan was the Green Hunter 3’6” championship, and reserve was Jennifer Bauersachs on Alistaire.

With nearly 40 entries accepted in the Green Hunter 3’, the division was split into Section A and B.

The Green Hunter 3’3” also had more than 30 entries in two sections.

There were three $10,000 Winners Stake classes for those who placed in the top six of the professional hunter divisions.