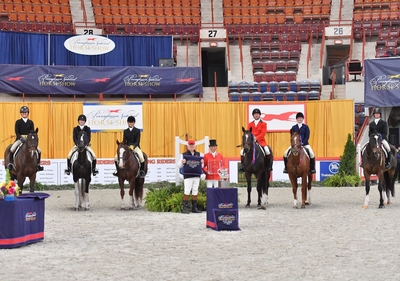 "Last night, representatives of Mr. Stewart's Cheshire Foxhounds attended Hunt Night at the Pennsylvania National Horse Show and had a fantastic showing," said joint Master of Foxhounds Sanna Neilson. "It was a very competitive night with many nice horses."

Throughout the evening, more than 100 riders participated in the Field Hunter, Hunter Under Saddle and Hunt Team classes.

At the end of the evening, it was the team from the Keswick Hunt Club One that accumulated the most points.

“We love coming to Harrisburg every year; it’s a great time” said Rives, of the Keswick Hunt Club. “We’ve now won the championship 10 times, and Mr. Stewart’s Cheshire Foxhounds have won it nine times, so we continue to compete over the years.”

The night began with 36 competitors in the Field Hunters, 35 Years of Age and Under, and the winner was Trisha Eckard on Crown Royal, representing the Huntingdon Valley Hunt.

The Field Hunters, 36 Years and Older, followed with a win for Jill Wilson Anderson of the Keswick Hunt Club on Jewell Hill, and Cindy Buchanan riding Stroll to the Beat placed sixth

In addition to the competition, Hunt Night also featured the crowd-favorite Parade of Hounds, put on by the Radnor Hunt Club.

The Gentleman’s Hunter Under Saddle followed the Parade of Hounds.

Cheshire placed an impressive both first and second with Conrad Somers on Right on Que winning and being awarded the Rose Tree Perpetual Trophy, with David Beecher riding Tanya Emslie's Havanna placing second.

Catherine Wheeler and Something Special, representing the Keswick Hunt Club, won the Ladies Hunter Under Saddle which earned them the Betty Baldwin Meister Memorial Perpetual Trophy, and Tanya Emslie riding Havanna placed seventh out of 45 in the class.

Following both over-fences and flat phases, the Hunt Night Leading Lady Rider Award was presented to the lady rider who acquired the most points over fences and in the under saddle, the honor also includes that rider’s name being added to the “Polly” Gingrich Caswell Perpetual Trophy.

It was unusual but, not two, but three, competitors tied for the title of Leading Lady Rider Award, with Trisha Eckard, Jill Wilson Anderson, and Catherine Wheeler all having their names added to the trophy.

Bringing the evening to a close, Mr. Stewart’s Cheshire Foxhounds Team One topped the 18-team leaderboard in the finale of the Hunt Team Challenge, hoisting the Potomac Hunt Challenge Trophy.