FAIR HILLS, Md.--World # 1 Tim Price on Coup de Coeur Dudevin held on to his razor thin lead over Tamra Smith on Danito to win the Maryland Five Star, with World # 3 Oliver Townend  on As Is finishing third. 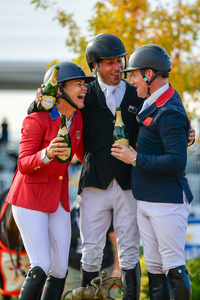 Tammie Smith,Tim Price and Oliver Townend celebrate with champagne (Photo by Allen MacMillan)The top five were separated by less than one rail going into show jumping, and the top four made it exciting for the large crowd of spectators, as all four, going in reverse order of faults, went clean, forcing the ones coming after each of them to jump clean to maintain their position.

To add to the pressure on the top three riders, the top three horses were all competing in their first five star, so they couldn't be sure about how they would perform.

"It's an amazing feeling,"said Price."This is a fantastic horse. He tried so hard, and what a stage to do it on. His owner, Jean-Louis Stauffer, bred him, and he was so positive about coming here.

"This is my last event of the year, so this is a nice way to finish the season," said Price. "This place has so much potential as it keeps its place on the calendar."

“I’M VERY PROUD of Coup De Coeur Dudevin,” Price said. “In fact, I think all three of these top horses are incredible. It’s exciting for the sport, it’s exciting for us personally, and it’s just so unexpected to have a top result like this." 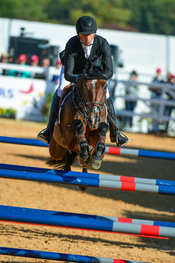 Tim Price (Photo by Allen MacMillan)"I came in hoping that I would have a top-five finish with this horse, but I expected there would be a couple of things that showed his lack of experience. Luckily, we were able to do that while keeping a nice, low score. I thought he did quite well.

“For my round, there was a lot of pressure,” he a said. “But you just stay focused on the job. To build up the rhythm before the start was the most important part of it. Then I just tried to give him a good ride and stick to the plan. If I had to execute Plan B, I had to do it quickly and do it well. He’s got a really long stride, which was more evident today than in some of the other show jumping rounds I’ve had, but he really turned himself inside-out for me. He really impressed me, and I’m very excited about him.”

“It has not been the fairy tale year that you might think,” said Smith, who won a team silver medal at the Eventing World Championships in September. 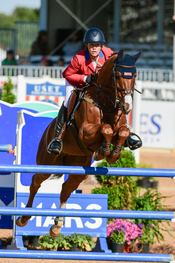 “Long story short, California in my area was infected with EHV this winter. I got out of there right before that and went east, but then I promptly broke my ankle and tore all the ligaments in it. I could just see my dreams kind of fading away. I didn’t think I’d be in contention for the World Championships, but I also wouldn’t take no for an answer.

“These guys are legends in the sport, and it’s an honor to be up here with them,” she said. “The first three months of 2022 was a disaster for me. My horse had broken his withers on top of everything else, so to have the fall season that I’ve had from Pratoni on has been really special. He's such a mighty little horse. I have a huge, wonderful support team, and I know that we’re all just ecstatic about this accomplishment.” 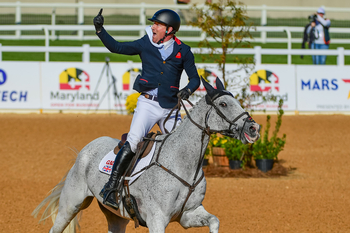 Oliver Townend (Photo by Allen MacMillan)“I’m obviously delighted with him,” Townend said. “He's a cool dude. He belongs to my new job at Caunton with the Peace family. It’s the first time I’ve had a job since I was 21, so delivering these results to the people employing me for the first time this year is really special to me. It’s been a different year for me with so many people behind the scenes at Caunton, but one that’s been so, so positive.

“As Is was purchased earlier this year, and for us to deliver the result that we thought he was capable of is incredible,” he said. “You never know with a new horse and a 5 star; anything can happen. He went out a bit green yesterday, and I thought last night, ‘Let’s just hope he’s as careful in the show jumping, and we’ll be alright.’ To know that I was on such a good jumper, it came down to me to press the right buttons and get the right distances. It’s just hugely exciting that we have a horse of this caliber.”

ELISA WALLACE on Renkum Corsair finished on her dressage score of 26.4, to win the CCI3*-L Eventing National Championship. 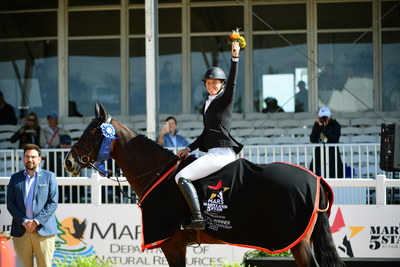 Elisa Wallace on Renkum Corsair (Photo by Allen MacMillan)Wallace was in second place overnight with no room left for error, but that pressure didn’t stop her from putting in one of only nine clear show jumping rounds.

“I knew how the course was riding since I had my first horse, Let It Be Lee, in there,” Wallace said. “And from riding last year’s, I knew it could be a tough requirement. It’s tight and a very jumper-type course. I had a lot of confidence coming in with Renkum Corsair; he did the 1.45m jumpers as a 7-year-old, and he’s really helped with my confidence in show jumping. I just pretended like it was a jumper round at the World Equestrian Center.

“He felt fantastic,” she said. “He didn’t feel at all affected by the cross-country the day before. He jumped a beautiful round, and it was quite fun to be in there. I’m really ecstatic and couldn’t be more appreciative of my owners in the syndicate. The horse is just a really, really cool horse. He’s just getting stronger and stronger, and I feel like there’s a lot more to come from him.”

Second-place finisher Jenny Caras moved up nine spots from her overnight position in 11th thanks to her double-clear round on Sommersby to finish on her dressage score of 29.9.

“I didn’t think I would move all the way to Reserve Champion,” Caras said. “I just knew that I needed to go in and jump my round. My horse had every capability of having a clear round, so that was all I could do. I came in wanting to finish this event on our dressage score, and we’ve hit that goal. I couldn’t be prouder of him.

“I was talking to the owners after my round and had friends texting me saying ‘You’re moving up, you’re moving up,’” she said. “And I just said, ‘I’m not going to win. If I could even make it to the top five, that would be fantastic.’ I’m so excited to be here in second now.”

Despite dropping a rail at fence #10A of the penultimate combination, Cassie Sanger on Fernhill Zoro maintained her overnight placing to finish third with a score of 30.6.

At just 18 years old, Sanger also earned the Best Young Rider and Best First-Timer awards for her success in her first CCI3*-L.

“I remember at the beginning of this season, we were talking about the plans for my horses,” Sanger said. “I’ve been riding Fernhill Zoro for less than a year, and I said to my coach, ‘I really want to go to Fair Hill.’ She wasn’t so sure about that, but we kept moving along and solidifying my partnerships with each of my horses. It couldn’t have worked out better. Riding is such a tough sport; I already wish I could have done better and am already thinking about what to improve on. But I’d definitely say it was a successful year.”

“Thank you to all of our sponsors for making this event possible, especially MARS Equestrian™ and Brown Advisory for stepping up as our Title and Presenting Sponsors,” said Jeff Newman, President & CEO of the Maryland 5 Star Committee. “Thank you to the FEI riders and officials for coming from around the world to put this event together, to the staff and volunteers who worked tirelessly to get it off the ground, and to all the fans who gave us some amazing support this year. We’ve had a spectacular second event, and we hope everyone comes out to Fair Hill and Cecil County for years and years to come.”