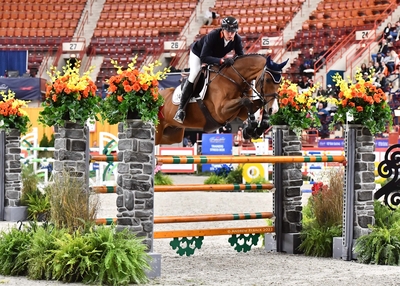 Holtgers was one of 23 entries that contested Saturday’s Phase III class, with each rider that qualified for the final phase of the three-day Individual Championship coming into the evening carrying penalties based on their results from Phases I and II.

All of the top six riders coming into the evening sat within 3.05 points of one another, so the pressure was on to perform over the Alan Wade-designed course.

As one of only three clear rounds, the 16-year-old from Austin, Texas shot up into the eventual fourth-place position.

Fellow Texan Tessa Downey similarly climbed up the ranks with a clear round on Isabelle, moving her up from sixth place to win the silver medal.

Holtgers and Virginia Bonnie were the final two to return, and when Holtgers produced a clear round, the pressure was on for Bonnie and her own Heldorado.

Bur a rail down dropped Bonnie from the lead, although she did win the bronze medal.

“It was a really great course to test all the skills required – including rideability both forward and back,” said Bonnie, 18, of Upperville, Va. “It was really, really well designed. Coming back on top – Heldorado doesn't have the most experience. We spent a lot of time in Spruce Meadows stepping back, and we spent the time really allowing him to mature. So, genuinely, to be here is just a huge, huge honor. I'm immensely proud of him. Going in, whatever was happening, whatever was going to happen, I knew I could not be happier with how Heldorado jumped and the huge effort he put into everything.”

Downey expressed similar thoughts in regard to her silver-medal winning mount, Isabelle.

“She’s an incredible animal. Ken and Emily Smith, as well as Peter Pletcher and Jef Lauwers were the ones that teamed us up together, and I just couldn't be more grateful to them for allowing me this opportunity.”

For Holtgers his partnership with Chaploon, a 12-year-old Oldenburg gelding owned by Gut Einhaus LLC, is still relatively young.

“I was first introduced to Chaploon in about May of this year,” said Holtgers of the gelding acquired from Paul Schockemöhle Stables in Germany. “I remember we flew out there in about May to try him. Ever since I sat on him, I was in love with him. He is just so much fun to ride. He comes back; he has a huge step. He's ultra-careful, and he's very scopey. It’s a great partnership, and I can't imagine a better way to start our partnership off really than to win a gold medal.”