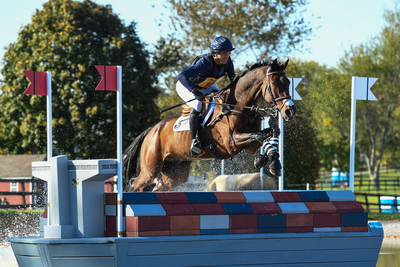 Tim Price on Coup de Coeur de Dudevin  (Photo by Kim MacMillan)The top three are all riding horses that are competing in a 5 star for the first time and finished on their dressage scores.

Tamie Smith, U.S. team silver medalist at the Eventing World Championships, moved from sixth to second place on Danito on 29.4, and World #3 Oliver Townend of Great Britain moved from 10th to third on 29.9 riding As Is.

Phillip Dutton on Z moved from 11th to fourth on 30.5, and Buck Davidson on Carlevo added .8 time faults to finish on 30.6 and move from eighth to fifth.

Course designer Ian Stark revamped his courses after getting a better feel for the terrain at last year’s inaugural event.

The CCI5*-L featured 45 total jumping efforts over a 6,555-meter track and presented many technically difficult questions to the competitors, but 13 entries were able to finish clear within the 11.5-minute optimum time.

“I WAS A little bit nervous and wondered if it was the right thing to bring a newer horse all the way across the world,” Price said. “There’s a lot on the line, from the owner’s investments to the work we put in ourselves. But I always believed in the horse, and today was the perfect experience for him. We had good conditions, a great course, and something I could just try to give him a good education over. 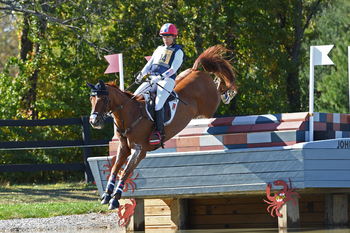 Tamra Smith on Danito (Photo by Kim MacMillan)“I was just riding that balance the whole way,” he said. “He jumped beautifully, took his own initiative through the crab water and made a better decision than me, and that’s what makes this a mark for the top. Nine minutes in, he was still able to have the presence of mind to make a good decision and to keep thinking forward. I’m very proud of him.”

"He's a great horse,and he showed his class all the way around," said Price. "It's good fun to be in the lead. This is a young horse and we're going to give him a good night and hope he comes out strong tomorrow."

“Danito had a freak accident in the barn in January, so he really didn’t have a spring season,” Smith said. “I was hoping to actually have him as a contender for the World Championships, but his first event back was in July. He was great for that event but not the fittest."

“To have him go out today and step up was great,” she said. “With these 5 Star horses, you just never know. He’s knocking on five percent of the blood, which can be a lot of work on the rider when the horse doesn’t have enough puff at the end, but he sure did. I’m super happy with him. He was a little bit green coming out, but everything on the course was right there.” 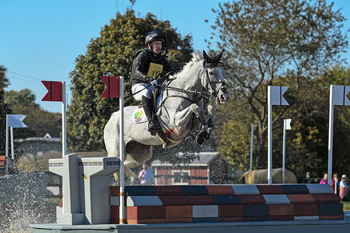 Oliver Townend on As Is (Photo by Kim MacMillan)"He was a little distracted by te crowd at times, but he's such a fighter," said Smith. "He's answered the question,he's a five star horse."

“I thought the course was fabulous,” Townend said. “With all the distances, you had to make a decision and make it happen. I couldn’t have been happier with how my horse grew in confidence. When you’ve got hopefully a good jockey and a good horse, that’s what you should see with a first-time 5 Star horse. Mine definitely came out for the run and gained confidence as he went. By the end of it, he felt like a proper 5 Star horse. He’s a careful jumper, and I’ve been very happy with the whole thing.”

Woods Baughman on C'est la Vie, who led after dressage, had 15 penalties for knocking off a flag and having his horse's haunches jump outside of the fence to drop to 19th on 48.0, and Alexandra Knowles on Morswood, third after dressage, had 6.4 time faults to stand 12th on 35.2.

Despite changes across the leaderboard in the CCI3*-L Eventing National Championship on Saturday, the top three maintained their placings, including overnight leader Hannah Sue Hollberg. 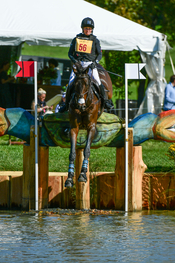 Hannah Hollberg on Capitol HIM (Photo by Allen MacMillan)Hollberg finished the cross-country phase on her dressage score of 26.0 on Capitol HIM.

“I was really lucky to get on Lukeswell first in the 3 Star,” Hollberg said. “He’s a really good cross-country horse, so I got to feel my way around the course with him. He gave me a really good ride. When I got on Capitol HIM, he was really good, too, but quite a different ride from Lukeswell. He’s got one or two speeds rather than being a really quick, nippy horse. To ride quick, I had to be very accurate and wasn’t completely, but he made up for it. He was great.”

“He’s a fairly new ride,” Wallace said. “I’ve had him since end of January, early February. He came from over in England and was produced by a young rider who moved him from the 1.45m show jumping into eventing. When I took a look at him, he was a pretty cool horse and seemed like he had a lot of potential.

“I kind of got teary-eyed after dressage,” she said. “To finally figure him out and to get our partnership to this level is great. He is a very different ride to the thoroughbreds that I normally ride, but to be able to come here to Maryland and get that atmosphere we don’t normally get, it was a really good experience for me and the horse.”

“It’s obviously very exciting,” said Sanger, who is in line for a podium finish in her first CCI3*-L. “I’ve had Fernhill Zoro for less than a year, but he’s been with our barn and my coach’s program for about seven years, so I know him very well. So far, it’s been pretty incredible. We earned a new personal best on the flat, and today he went around double clear. He’s a young rider’s horse through and through, so you just have to let him do his thing. He’s incredible.”

Feeling just as much pressure as the competitors in the field, course designer Ian Stark was pleased with everyone’s results at the end of the day.

“What’s made my day is that our top three are riding first-time 5 Star horses,” Stark said. “Those horses are incredibly lucky to have three of the best riders in the world. They were magnificent in how they rode the young horses and helped them, and as Tim Price said, the young horse was able to help him. For me, that’s a highlight of why I do this; it was amazing to watch.

Sunday’s Second Horse Inspection will start at 8:30 a.m. with the 3 Star entries.