Zone 2 third by less than a second in the Prix des States at Pa. National H.S. 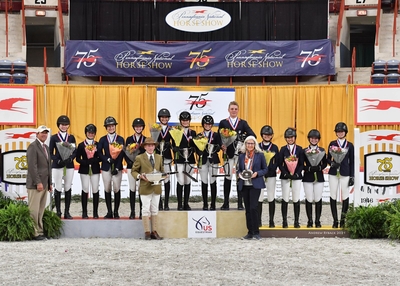 Prix des States Podium (Photo by Andrew Ryback Photography)While the Texas-based riders earned a clear-cut win with a total of 8 faults in the two-round, modified Nations Cup format competition, the silver and bronze medal positions came down to a tight race between Zone 2 and Zone 10.

Both teams finished on a total of 12 faults, but Zone 10’s second-round total time proved to be less than a second faster than Zone 2’s time.

“IT'S SUCH A privilege to be on a team with these girls; it means so much,” said McCutcheon, 16, of Aubrey, Texas, who was making her third Prix des States appearance. “Zone 7 was team silver last year, so it just felt so good to capture gold this year. It’s just so fun to show in that arena.”

“I've been watching Harrisburg since I was still riding Western when I first started," said Cady, 16, of Austin, Texas. "I came here last year and just did the Medal Final, but I stayed and watched the jumpers. It always seems like a really cool environment. It was really fun to know that, no matter how the score is, you come in with the great team of girls.”

The track for the evening’s class in the Harrisburg Coliseum was set by Alan Wade, and it proved to be consistently challenging across the board, with no riders in the field producing a double clear effort.

Each of the Zone 7 riders turned in equal performances, with one rail falling for each of them in either the first or second round.

“I think it's wonderful that we get someone like Alan Wade to come here and do this,” said Zone 7 Chef d’Equipe Martien van der Hoeven. “For sure if he's not the best in the world, he's one of the top three. So, for the girls, there was never this horrific score. There was never anything bad on any of the teams or any of the riders. I think that bodes well for management for getting Alan to come here, for him and his skills as a builder, and it just allows for the whole night to be fun no matter what the result was. I think every horse, every rider went in and out and got better as it went. That's a sign of a good course designer.”