FAIR HILL, Md.--Woods  Baughman of Lexington, Ky.,on C'est La Vie leads the CCI5*-L at the Maryland Five Star on a score of 27.2 after the first day of five star dressage on Thursday, Oct. 13. 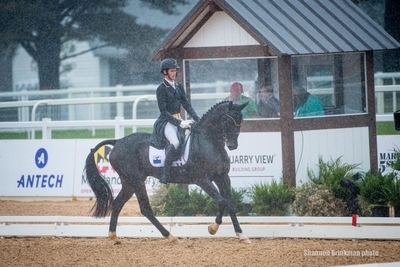 WoodsBaughman on Cest La Vie (Photo by Shannon Brinkman)Baughman riding C'est La Vie has won previously at Fair Hill in 2019 when it was a four star.

“He’s a fantastic horse,” Baughman said of the 14-year-old Hanoverian gelding. “He likes as much free time as possible, so we give him as much time as we can to just be himself. He’s a big, strong horse that doesn’t like to be pushed around too much, and we’ve found that I’m better off stepping in last minute to tell him what we actually need to do.”

After his starts in Kentucky and Burghley earlier this year, Baughman came into Maryland with significantly fewer nerves.

“We’ve been laughing this week because I kind of feel normal,” he said. “I feel like I do when I go to most of the other events, my horse is ready, and we’re quite thankful because there haven’t been any flights. I feel totally relaxed and have just stayed my normal self.”

WHILE WRAPPING up the dressage competition through the day’s hardest rain, Baughman knocked fellow American Tamie Smith and Danito out of the top spot on the leaderboard.

Smith and Ruth Bley’s 13-year-old Hanoverian gelding now sit in fourth place with a score of 29.4.

Astier Nicolas of France on Babylon de Gamma is second on a score of 29.1, and Liz Halliday-Sharp on Cooley Quicksilver scored of 29.3 to stand third.

Nicholas was in the top10 at Fair Hill last year in its inaugural event as a five star.

"He's an amazing cross country horse,"said Nicholas of his mount.

“I think the Maryland 5 Star has done a really good job this year,” Nicolas said. “They’ve made quite a few improvements from last year, the course is difficult but fair, and we’re really happy with the way it all looks so far.”

Smith, recently returned from riding on the silver medal Eventing team a tthe World Championships, on Danito was scored  29.0 after her ride, but it was corrected to 29.4 after a judges' consultation.

"He's always consistent in this phase,"said Smith. "I didn't ride here last year,but I attended and walked the course. I like this year's course better. It's open and gallopy, like Fair Hill used to be. It's bigger than last year."

Twelve of the 24 entries in the five star went in dressage on Thursday, with the remaining 12 scheduled to compete Friday at 2 p.mm.

The Main Arena opened Thursday morning with dressage tests for the USEF CCI3*-L Eventing National Championship, where World #5 Will Coleman on Cold Red Rum took the lead with their score of 27.1.

“I’ve had this horse for just over a year, and I don’t think I competed him for the first three or four months I had him,” Coleman said. “I felt like I had to really give him that time to settle emotionally and to physically develop. He was a bit of a weak and nervous horse for his age, but we’ve given him a lot of time."

“He’s really coming along,” he said. “My motto with all of them is to never be in a rush. I think now everyone is starting to see the quality that we saw when we tried him. He still has a long way to go, but we’re quite pleased with where he is at the moment.”

Beale rode Carlson 119 to a dressage score of 27.7, while Nicholson is not far behind with her score of 28.0 on I’ll Have Another.

“The one thing that you get for the 3 Star horses here is the 5 Star atmosphere,” Coleman said. “I think the 3 Star track this year is a significant step up from last year, but I also think it’s extremely fair. It’s going to give everyone a very good fitness test for what their horse is ready for. And that’s sort of the idea, right – these 3 Star Longs are supposed to prepare you for the next level. I really think Ian Stark has accomplished that here.”

The 5-year-old division will be awarded Friday evening following the final rides for the CCI5*-L dressage.