DEVON, Pa.--Alice Tarjan of Oldwick, N.J., on Jane, her own 8-year-old Oldenburg mare, dominated the CDI3* Intermediate B class, scoring a new personal best of 71.459 percent. 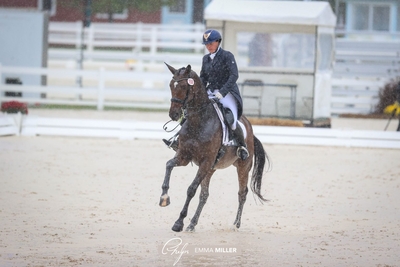 Lauren Chumley on Santa Barbara DASH (Photo by Emma Miller)Donna Gatchel on Reflection, a 9-year-old mare, finished second on a score of 64.838 percent, while Canada’s Rebecca Cowden on Sinatra’s Rose RS, her own 12-year-old mare, was third with 61.108 percent.

Lauren Chumley of Pittstown, N.J., was the first to compete in the CDI3* Intermediate I Freestyle.

Next in was Canada’s Christian Garweg on Excalibur RS, a 13-year-old Danish Warmblood gelding, who scored 69.792 percent.

ERIN BONNEVILLE and Qennett HTF, her own Hanoverian 8-year-old gelding, followed putting up an impressive Jurassic Park themed freestyle performance to overtake Garweg and secure second place with a score of 71.125 percent.

Silva Martin on Esperanto, a 13-year-old KWPN gelding, was last in the ring, earning a 69.5 percent that would place her fourth.

In the FEI Young Riders Freestyle, Olivia Turcot on Lalique, a 15-year-old Oldenburg mare, placed first with a score of 69.18 percent.

In the FEI Intermediate I Freestyle for Amateurs, Emily O’Neill on Funky-Boy, a 12-year-old KWPN gelding, won with a score of 66.47 percent.

Meghan Richards and Kingstown, her own 7-year-old KWPN gelding, was second with 63.92 percent.