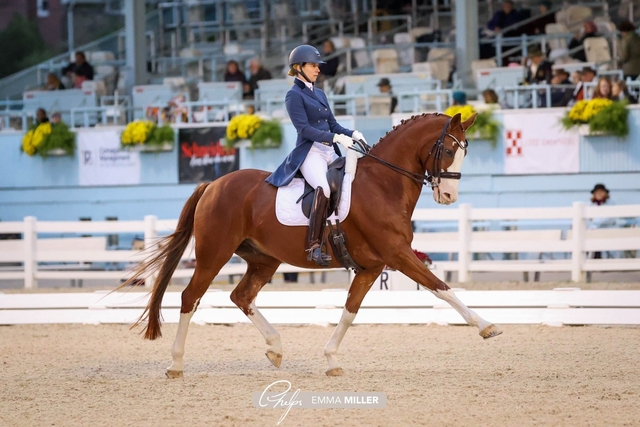 Micaela Mabragana of Argentina on Diamond Rosso, a 12-year-old Hannoverian gelding, won with a score of 64.435 percent.

“THIS IS the first year we are doing the grand prix, it’s new and I didn’t really have a freestyle made at this point," said Mabragana. "I did want to get my feet wet in a CDI, so that’s why we picked the special.” 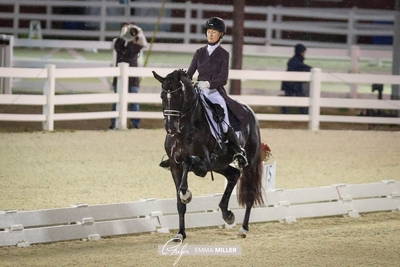 Alice Tarjan on Serenade (Photo by Emma Miller)“I love it here," said Mabragana. "I was so looking forward to coming back to Devon. It’s such a special show. Even though the class is a little bit smaller, the place has so much history. You go into the Dixon Oval and feel like, ‘wow.’ I’m really proud, lucky and honored to be here. It’s great to do these kinds of shows. The atmosphere, the lights, the parade going on…everything just has a different vibe. So I think we have to keep this show very much alive.”

“I came here when I was 17 to become a working student for Lendon Gray," said Mabragana. "I was working with her for five years, and then I started my own business. That was the beginning of my career, with Lendon. It was through her and her opportunities that she gave me that I was able to do it. The last time I was in this room I was a young rider. I had the right horse, another chestnut with four white socks. It was a chestnut affaire.”

“I don’t want to jinx anything, but I would like to be able to do the Florida circuit with him and be able to represent Argentina at the Pan American games," said Mabragana. "I’m training with Antonio Diaz Porras — he is from Spain, and is my partner. I actually met him in the Pan Am games of 2015 because he was the coach for the Argentinian team. He was in Spain, but just came here in March. So we are running things together. He does more of the sales horses, I do more of the clients. We are a good team.”

In the CDI-W Grand Prix Freestyle qualifier, Canada’s Vanessa Creech Terauds was the first in the Dixon Oval on Fleur De Lis L. scoring 64.826 percent to set the bar for the class.

Alice Tarjan on Serenade MF, her 9-year-old Oldenburg mare, winners of the USEF Grand Prix Dressage National Champions just last month in the U.S. Dressage Festival of Champions, laid down a consistent and expressive test to score 71.804 percent and take over the lead.

Shannon Stevens on Ferrari, her own 12-year-old KWPN gelding, were next in the ring, placing third with a score of 65.609 percent.

Canada’s Megan Lane on Zodiac MW, an 18-year-old KWPN gelding, was last to ride, setting her sights on beating Tarjan’s score, and she put in a strong effort to earn a score of 67 percent, and settle for second place.

“It wasn’t what we had in the warm up, but it’s always a work in progress," said Tarjan. "Hopefully tomorrow will be better and we have a better horse tomorrow. It’s an ongoing process to try and get the quality I can get in the warmup in the ring, but she doesn’t let you down, she really tries her heart out.”

“I think it was a great idea," said Tarjan of riding in Thursday’s Masterclass with Sabine Schut-Kery. "They had a fantastic turnout, it was really exciting to see so many people in the stands. She was great to work with and was a lot of fun. It was great exposure for that horse. It’s hard to duplicate this kind of atmosphere, so I think the more the horse’s see it the better.”

“I think Dressage at Devon is a fantastic show ,"said Tarjan. "That’s why I came, to show support. It would be great to see it go forward in the future. You have a crowd and they’re closer to the arena, definitely more spectators here than other U.S. shows, so that’s exciting. I would have never thought I’d come back and win. The first time I came here I had cancer. I thought, ‘this is so cool…if I can live long enough, I just want to come back and ride here. It’s been a journey.”

The Kingsview Partners Roaring 20’s Party took place overlooking the action, while prior to the Grand Prix classes, several exhibitions were featured in the Dixon Oval.

Guy McLean, an Australian horseman performed with his four-horse team, demonstrating impressive feats with the horses, only one of which he rode while the others followed his instructions without tack of any kind.

McLean will return for more exhibitions on Saturday, and on Sunday will host a clinic titled “The Method Behind the Magic,” where he will detail how he trains his teams of horses.