PRATONI DEL VIVARO, Italy--Chester Weber with his four-in-hand team is fourth overall after he finished ninth in the marathon phase at the Driving World Championships on Saturday, Sept. 24. 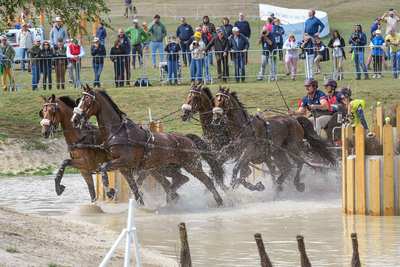 Chester Weber (Photo by Kim MacMillan)Weber completed Phase A of the marathon and Phase B, featuring eight different obstacles, for a total score of 159.88 after dressage and marathon.

Boyd Exell, 50 of Australia, who has been World Champion eight times including individually for the last five World Championships, leads individually on 150.14, followed by Michael Brauchle of Germany, who finished first in the Marathon phase to move from ninth to second on 156.18.

Weber guided the team of Amadeus, Boris W, Gouveneur, and Julius V, through the challenging terrain and intense course designed by Josef Middendorf of Germany.

“THE COURSE was hilly up and down and it was really a nice challenge," said Weber. "There are a lot of shows where we’ve driven the same track so many times, and that experience can be invaluable, but when you come to a competition like here in Pratoni, and this was a really new feeling and test, and you really had to be a clever driver and know where your strengths are and what you can and can’t do.” 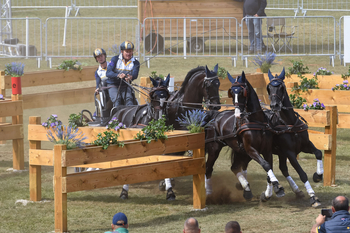 Boyd Exell (Photo by Allen MacMillan)With two newer combinations debuting in their first world championship, in both Amadeus and Julius V, the pair rose to the occasion and strengthened the team’s overall score with their agility and responsiveness to the questions asked throughout track.

“I felt like the first four obstacles were really strong," said Weber. "They handled it really well. I lost a little bit of pressure on the leaders after the fifth obstacle, but this team is a little inexperienced and completely new leaders from Tryon and they showed a lot of promise today. We’ve been working really hard at home to try and get them faster and certainly what I saw in the first four obstacles is the talent we need for the future and standing on another podium.”

Weber was quick to compliment the team behind him who help him continually produce top results on the international stage, nothing that without their commitment and support, it would be impossible to succeed.

“I was super pleased with the team of people around me," said Weber. "This isn’t an individual sport. I’m the guy who gets to sit there and hold the reins and take the glory or the blame, but it truly takes a village to make this happen. I’m not a Formula One driver, but I can imagine without an engine guy and a tire person there’s no way you can be a Max Verstappen or be successful in sport, and I’m really proud of the way the team has handled these championships and we still have one more day to go.”

Looking ahead to tomorrow’s final cones phase, Weber is looking to produce a fast, accurate round with his horses in hopes of securing a third consecutive individual medal at the world championships.

“Tomorrow’s a new day and we’ll show up the best we can. These championships always end on Sunday,” he said.

The Cones competition begins at 6:30 am ET and competitors go in reverse order of standing with Weber fourth from last, possibly around 10 am, as the Cones awards presentation is scheduled for 10:45.