PRATONI DEL VIVARI, Italy--Chester Weber with his four-in-hand team received a 41.52 from the ground jury to finish this first day of competition at the Driving World Championships for Four-in-Hands, holding first place overnight with one more day of dressage competition to come. 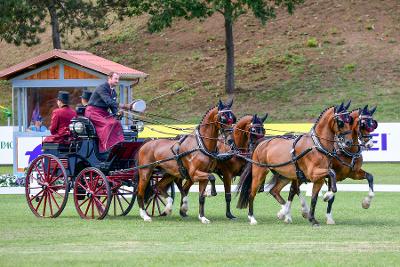 Chester Weber (Photo by Allen MacMillan)Weber will now look to the marathon phase on Saturday to continue his pursuit of an individual medal.

The team looked polished and precise during its dressage test, with Weber utilizing two veteran combinations in Boris W and First Edition, and two newer horses, with Amadeus and Julius V, for the initial phase of competition.

Weber of Ocala, Fla., felt he could have laid down a better score with the team in the first phase but will look to make up ground in the marathon and cones phases this weekend, with much competition still left to come.

“The first half of the test was really good, and the horses were on point,"said Weber. "We had a little bit of a challenge with the warm-up situation here, but in general, I was proud of my horses and the team all around. It’s good sport and it’s over on Sunday, so there’s still a lot to look ahead too.”

WITH SEVERAL seasoned pairs on his team, but also a few new combinations, Weber is developing more talent within his string for the future, with the team basing in Europe since early summer in preparation for the championship this week and to continue to compete against the best competitors in the sport throughout the summer months.

“We came over in May for the indoor world cups," said Weber. "With this sport, if you really want to be in the top five in the sport, you have to spend time competing against those people who are in the top five. We did three other competitions this summer before this championship during our time in Europe. Two of the horses here today were a part of my Tryon team, the right leader is a newer horse to the program and the left wheeler has been with us but is really just starting to come into himself.”

Looking ahead to Saturday’s marathon phase, the track uses the hilly terrain of Pratoni, and will require a lot of fitness and finesse with several of the course’s designated obstacles being portable, which will require carefulness and speed from the driving combinations.

“It looks like a really challenging, hilly course," said Weber. "The terrain will be a factor and there will be some tired horses, but it certainly will make for good sport and there are quite a few portable obstacles and a whole lot to knock down out there."

Anna Sandmann of Germany stands second on 42.52, with Georg von Stein, also of Germany, third on 49.44