UNIONVILLE, Pa.--Buck Davidson of Unionville on Carlevo, was leading after dressage and show jumping, and he was clear cross country, adding just 6 time faults, to finish on 32.5 and win the CCI4-S at Plantation Field International on Sunday, Sept.18. 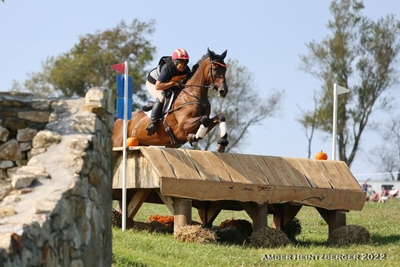 Woods Baughman of Lexington, Ky., moved from fourth to second on 34.0 riding C’est La Vie 135 after Liz Halliday-Sharp on Cooley Quicksilver, second after yesterday’s show jumping, added 15 faults for missing a flag and dropped to fifth place on 47.7.

Jenny Brannigan of Coatesville, Pa., on C'estLa Vie moved from15th to third by going clean cross country with just 0.4 time faults, the only ride any where near the ideal time, to finish on 36.0.

Halliday-Sharp also finished fourth riding DeNiro, moving up from 13th, clear cross country but with 10.4 time to finish on 44.5

Though the twisting and turning, technical course made sure cross country was an influential phase, there were no significant injuries to horses or riders.

“It’s fabulous,"  said Catherine O’Brien, who has owned Carlevo for the past two years. "This is a first for us at this level”.

The horse has taken the O’Briens, who are from Lexington, Ky. to the Kentucky Three-Day Event where he placed sixth, to Aachen, Germany and with any luck to the Maryland five-star.

Davidson’s student Allie Knowles, who finished 12th on 57.0 in the CCI4-S at Plantation Field riding Morswood, is the resident trainer at their farm in Kentucky.

Brannigan, who rode three horses in the four-star, said that FE Lifestyle jumped great, but she ran slow with Twilightslastgleam, who finished 15th on 61.9. claimed the top-placing Thoroughbred award.

Lifestyle is the alternate for Boekelo, so Brannigan said she wasn't sure where he is heading next.

"Lifestyle has really changed," said Brannigan. "His mind has come along. He jumped great. He's been really hard to ride, but he's settled. He has such a big step, but he's still easy to get back."

Brannigan and Davidson were held on course because a rail on a frangible fence fell just before Brannigan jumped it, and Davidson said that it was challenging getting Carlevo to be sharp on course after standing around during the hold.

“He’s a bit of a homebody, and going last of the day when there was a hold because of the fence that fell down, he was just hanging out, and everybody left," said Davidson, who went last as the riders went in reverse order of standing. "Getting him awake and ready to go is not always super easy, especially since he’s not the fastest horse in the world. He jumped off the little drop to the hedge thing and he wasn’t really with it so I fired him at the next fence and then he was awake. He was right on the markers at four and five minutes but he goes at one pace – he was the same way at Kentucky - he’s not the kind of horse you can make up time with.”

Davidson said he was really happy with his mount Erroll Gobey, who finished 17th after he focused on him keeping quiet and relaxed, and Sorocaima, who finished 22 with 15 faults for missing a flag, and who is heading to the Maryland five-star.

Carlevo sustained a small puncture from a stud on cross country, so he said his entry at Maryland depends on how that heals.

Baughman said that he recently took C’est la Vie to Burghley, but the horse ran off with him on cross country and he wasn’t able to complete the event.

He changed bits and bridles and found a better solution that he tested out at Plantation Field and found it worked well.

“It’s a Myler combo with a barrel in the mouth, shanks, and a hackamore," said Baughman. "It’s got a lot of things going on but it’s a soft bit with more poll pressure and it keeps him from crossing his jaw. It’s not necessarily strong as much as putting pressure in a different place, and he seems to be quite happy in it.”

Baughman was also held on course, and he said he forgot to reset his watch when he was held, and time faults relegated him to second place.

“You can’t argue with finishing second to Buck though,” he said.

Overall he was pleased with the event, said the footing was very good, and felt that it was a good preparation to test C’est la Vie with the new bitting system before they head to the Maryland Five Star next month.

Anna Loschiavo on Spartacus won the CCI3* and Sydney Hagaman on Charneur won the CCI2*.