The U.S. Eventing team won the silver medal at the World Championships

PRATONI DEL VIVARO, Italy--It was a never-racking, roller coaster finish to the Eventing World Championships as the medal placings among the top four teams changed with almost every rider in the top 25 that entered the show jumping ring on Sept. 18. 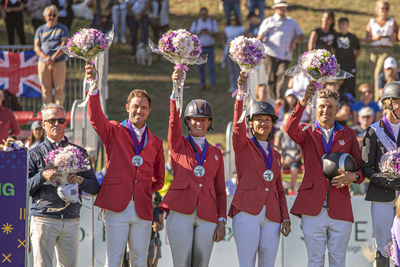 In the end, it was Germany winning the gold medal on 95.2 with the U.S.team taking the silver medal on 100.3  and New Zealand finishing with the bronze medal on 100.7, with Great Britain finishing fourth on 100.9.

The individual medals changed hands with every rider, too, with Great Britain's individual rider Yasmin Ingham on Banzai du Loir going clean to claim the gold medal on 23.2 when Germany's Michael Jung on fischerChipmunk FRH had two fences down to finish in fifth on 26.8, moving Julia Krajewski of Germany on Amanda de B'Meville into the silver medal on 26.0 and Tim Price of New Zealand on Falco into the bronze on 26.2, while Tamie Smith on Mai Baum, who had been standing third after cross country, also had two fences down to drop to ninth. 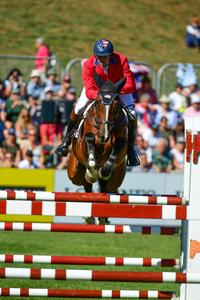 William Coleman on Off The Record (Photo by Allen MacMillan)“It was just such a crazy day," said Chef d’Equipe Bobby Costello. "I had a feeling when I walked the course that it was going to be very influential. I’d never seen such a consistently big and very technical track and have those three lines, all single jumps to combinations, with three completely different distances. It was a real important phase, and no team went unscathed, and you had to keep fighting to the end.”

“I hope this means great things for the future," said Costello. "I feel the program has been on the slow burn of the swing for a couple of years and I think there was still something missing. My number one priority when I took this interim position was to try and change the culture and really make sure that everyone had each other’s backs and building trust among the riders. The riders, the owners, the staff, people have never given up on the sport and I’m so happy for everyone, even those at home, who get to watch and get to be proud, so really good just all around for us.”

Coleman had the only clear round for the team, finishing as the highest placed U.S. rider, moving from 11th to seventh place overall on a score of 27.2.

“It was great," said Coleman. "I’m so thrilled. It was par for the course for this entire week for us to be honest. I feel like he’s punched above his weight in every phase and I’m just so happy with him. I’m so proud of my horse and my team and everyone involved with this program. I’ve had him since he was 4 and produced him myself and it’s cool to see him go in there and rise to the moment.” 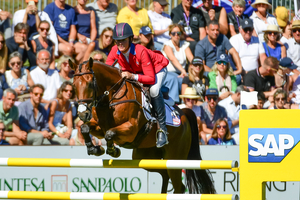 Lauren Nicholson on Vermiculus (Photo by Allen MacMillan)Nicholson went first in show jumping for the team and finished in 19th place overall on a final individual score of 41.1 after having two down plus .4 time.

“He tried his heart out for me out there," said Nicholson. "We had the two down that have caused loads of people problems at the end of the course, but he’s come out of this week feeling good. This was a really tough track. It’s super technical and a real show jumping track. He jumped well and feels great, so I’m really happy with him overall.”

In a notoriously challenging phase for Martin and Tsetserleg TSF, the pair dropped four rails for a total of 16 faults, for a final score of 41.2 to finish in 20th place overall.

“I’m very proud to be an American today," said Martin. "Having five clear rounds yesterday in the cross-country was awesome, and just looking at the results here, any three of the five of us could have gotten a team medal. I’ve been on many of these teams, and we’ve been so close over and over again, and it’s a massive sigh of relief. I’m really thankful for this team and proud to be here with these guys sitting next to me.” 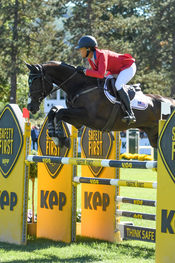 Tamra Smith on Mai Baum (Photo by Kim MacMillan)As the last U.S. rider on course, Smith added eight faults to their original score of 24.0 to finish on a 32.0, to take ninth place individually.

“We came here to do our best and I have to say, we all knew that potentially we could medal, and I think we’re pleasantly surprised and we’re less than a point away from third and it shows to the quality of the field and the riding," said Smith. "It’s impressive and I’m just so honored to be here. I’m very proud of my horse. I feel like it just wasn’t meant to be and that’s okay. We’re here and we got the silver medal and that’s what we came here for. I have to push that to the side that this isn’t about my individual performance, it’s about the team performance, and I’m ecstatic with our result.”

Ariel Grald said yesterday that her goal was to finish the championship on her dressage score of 32.5, which is exactly what she did.

On Leamore Master Plan, Grald was clean inside of the time in her first championship appearance for the U.S. to finish 11th overall.

“I was a bit nervous going in, and he’s such a great show jumper," said Grald. "I just have to trust him and trust that he’s going to go in and try, and I knew after the first fence that he was good. The combinations can be hard for him because he has such a huge step, but all credit to my horse. I really have to mess up as a jockey for him to not jump clear, so it’s a lot of pressure of me to give him a good ride. He’s absolutely brilliant. I wanted to finish on my dressage score and we did, so I couldn’t be happier for him and that’s all you can ask for.” 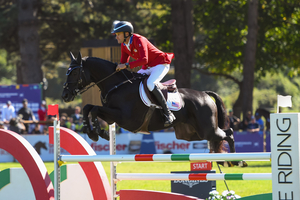 Boyd Martin on Tsetserleg (Photo by Kim MacMillan)"I'm still not believing it," said individual gold medalist Ingham, 25, who was riding in her first World Championships. "My horse was impeccable, just perfect. I'm over the moon. I'm still shaking."

"I felt extremely pressurized coming in," said Ingham. "I tried to treat it a just a normal horse trial and just focus on my job. I look up to all the riders on this team, and now I've made it and am World Champion. I'm speechless."

"It was super exciting late today," said Krajewski. "For us, it went up and down. My mare is so special. She jumped her socks off today. My goal was to finish on my dressage score, because that usually gets you a medal, and I did it." 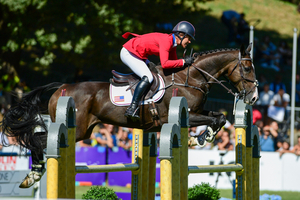 Ariel Grald on Leamore Master Plan (Photo by Kim MacMillan)"This is a super team on super horses," said Jung. "Today I'm a little unlucky, but my round was good enough for the team to win."