DEVON, Pa.--Mia Mannis on Hollyday V won the $25,000 Devon Fall Classic Grand Prix over a field of 29 on Saturday evening, Sept.17, making it the second big win for Mannis at the Fall Classic after she also won the Welcome Stake on Thursday. 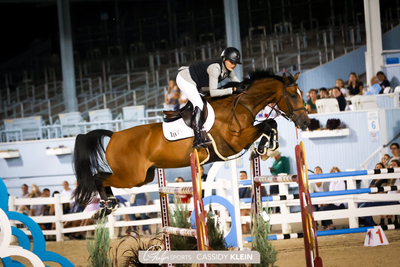 Mia Mannis on Hollydav V (Photo by Cassidy Klein)The brisk, fall night set the scene as the Dixon Oval was surrounded by spectators.

Manuel Espara of Mexico set a 12-obstacle first-round track that increased in technicality later in the course.

Of the 29 competitors, only 9 returned for the jump-off.

“I am absolutely thrilled with my horse,"  said Mannis, who finished clean in 34.236. "I have been targeting this show now for months, and I said months ago that this was the class that I really wanted to win. Not only did he win this class, but he won two classes this week."

“I did have a plan going in," said Mannis. "I just walked my track and everything rode exactly as I planned. He was so good earlier this week so I was able to just go off of how I felt earlier. He was really relaxed when I was warming up with him, which I was surprised about because I expected him to be really energetic and antsy. So it was nice to be able to create a plan and not have to worry about him being too fresh in the ring.”

“I AM ECSTATIC," she said. "This is my first Grand Prix win. I think this is his fourth Grand Prix in a row jumping a clear round."

“We have been together for just under a year now," said Mannie. "It is still fresh but it is really starting to settle in and we are really starting to click with each other. We are getting on the same page and it is an amazing feeling.”

Gracie Allen on Jelster Van Stal Romano was the first pair to go clean in the jump-off, finishing in the very fast time of 35.037 seconds to eventually place second..

Laura Chapot on Diarado’s Flying Dutchman, with Chapot coming off her win Friday night in the $5,000 Speed Stake on Calafornia, was clean but not fast enough, finishing in 35.627 seconds to place third.

Earlier in the day, juniors and amateurs competed in the $7,500 SJHF High Junior/Amateur Jumper.

Melissa Strawser on Darwin De Mars was the only double clear in the class for the win.

Charlotte Murray rode Heros S to a quick jump-off time but with a rail resulting in four faults and second place, and Kristin Glover on Eyecatcher was third.