UNIONVILLE, Pa.--Buck Davidson on Carlevo moved into the lead going into Sunday;s cross country in the CCI4-S division at Plantation Field International after dressage and the show jumping held on Saturday, Sept.17.. 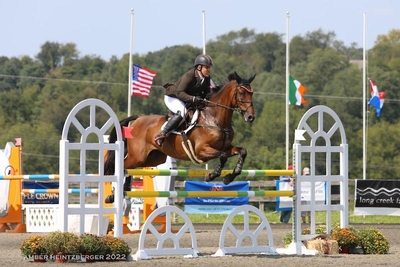 Buck Davidson on Carlevo  (Photo by Amber Heintzberger)With the top three just tenths of a point apart after dressage, two rails down in show jumping were costly for Liz Halliday-Sharp on Miks Master C in the CCI4-S show jumping Saturday.

With a clear round and just 0.8 time faults, Buck Davidson and Carlevo, a 15-year-old Holsteiner owned by Kathleen O’Brien, moved into the lead on 26, followed by Hannah Sue Hollberg on Harbour Pilot, who also jumped clear and added 0.4 time faults to standon 27.9.

Halliday-Sharp moved down the leader board to 11th place, but she rode Cooley Quicksilverto go clear and in the time to move from seventh up to third place on 29.5 in a division that boasts 40 entries.

“I was really happy with his dressage, he’s always quite good at that but to be honest I thought it was the best test he’s done," said Davidson. "Sharon White told me she thought it was his most up and through test and I couldn’t have been happier.”

“IN THE SHOW jumping, my first two horses jumped really well but both had two rails down," said Davidson. "I don’t think Carlevo loves the footing here and historically hasn’t jumped very well here, so I had to do something. I went and changed my whole outfit before I rode him because I felt like sometimes you’re the windshield and sometimes you’re the bug, and I felt like I needed to do something different! I guess the luck was on my side today because he jumped great.”

“The course is definitely different than a typical Plantation, it’s a lot twistier and turnier. It’s not nearly as big but it’s trickier.," he said. " It’s not as galloping as we’re accustomed to here. I think it’s going to be, honestly, a lot of short, quick bursts uphill. Carlevo has a big stride, not a fast stride, so I was looking forward to letting him go on these hills on this perfect footing but I don’t think it’s going to be that way.”

Earlier this year the pair competed on the US Eventing Team in Aachen, Germany, where they had a run-out on cross-country.

“He was terrific in Aachen but he was totally overwhelmed and just shut off on cross country and had a run-out at the coffin," said Davidson." But he’s getting faster and I think overall the experience at Aachen was good for him.”

Carlevo is entered at the Maryland five-star, but Davidson said that he’s on the fence about running him there or just ending the horse’s competition season after Plantation Field, while the horse is sound and going well.

Davidson, who grew up just down the road at his family’s farm, Chesterland, said that while his horse’s wellbeing always comes first, he’ll be looking to make the time on cross country tomorrow and bring home the win.

“At this point in his career he is fit enough to do this, and when you get a chance to win you’ve got to go for it,” he said. “I’ll never put that above the good of the horse, but I do live here and know these hills.”

Davidson is also riding Erroll Goby,, who is in 24th place, and Sorocaima,in 30th, in the four-star.

“They’re both seasoned horses at this point," said Davidson "I also had Strathco Solitary Minstrel,, who was 16th, and Ceraphino D in the three-star. They’re young horses and I took them out quietly. I’ll just be working on rideability with the others and plan to give Carlevo a good run tomorrow.”

The four-star concludes Sunday with cross country, which begins at 1 pm following the Sunday Brunch, sponsored by the Bank of Malvern and honoring Jessica Ransehousen.

Show jumping for the CCI2* takes place from 9:30 am-12 pm and the vendor village opens for shopping at 9 am.