U.S. second by one point to Germany going into stadium jumping, with Great Britain third

PRATONI DEL VIVARO, Italy--The U.S. Eventing Team had a fantastic day on cross-country in the hills of Pratoni in the World Championships, finishing all four team members and the individual rider around the course designed by Giuseppe Della Chiesa of Italy without any jumping faults on Saturday,, Sept. 17. 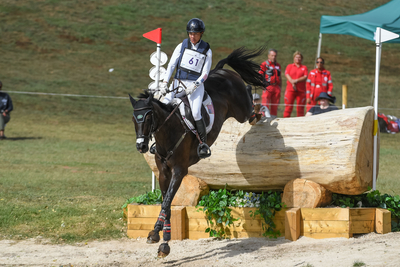 All five American riders complete the cross country without any jumping faults and three were double clear, no jumping and no time.

According to the best research The Horse could do, this was the first time since the 1974 World Championships in Kentucky, where the team of Bruce Davidson, Mike Plumb, Denny Emerson and Don Sachey won the gold medal and Davidson won the individual gold with Plumb winning the individual silver, that all team members and individuals finished cross country without a jumping fault.

Only 10 of the 88 competitors jumped double clear, including three Germans and three Americans,as well as two Brits, one French and one New Zealander.

“TODAY absolutely met my expectations and I think everyone leading up to this day has just had a really good feeling about where we were heading,” said Chef d‘Equipe Bobby Costello. “The feeling in training camp and everyone’s attitude here has been exactly what we have wanted, but we haven’t had a day like this in a really long time for the U.S. It’s really gratifying and I’m happy for everyone here – the riders, the grooms, the owners, the staff, and everyone at home, but having said that – we’ve already stopped celebrating. We’re one hundred percent focused on the job tomorrow and aren’t thinking about anything other than finishing this competition and doing what we came here to do.” 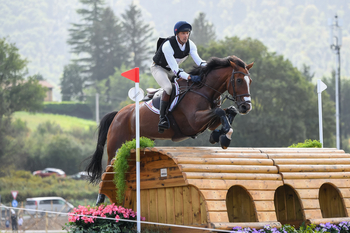 With several key areas on the track, the experience was vital for the team’s planning for the rest of the day.

In his first championship appearance with Off The Record, Coleman of Gordonsville, Va., finished just two seconds over the time for a score of 27.2 and holds 11th individually.

“He was really good out there," said Coleman. "He answered all of the questions very confidently. He’s kind of a bulldog and he takes the bit and wants to go, but I was really pleased with almost how arrogant he was out there, strong and focused, and almost saying, “Let me at it, Dad,’ and it was a really cool feeling. He’s a very efficient horse and he’s very quick. He was really fit and I’m just so happy with how he ran.” 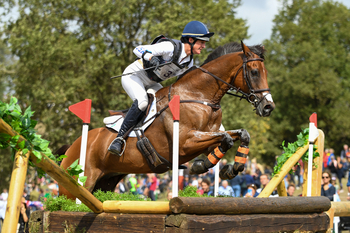 “He’s just super," said Nicholson. "This is our ninth CCI5* together and we just know each other so well at this point. He knows how to get himself out of tough situations and I knew all of the questions were there for him and it was on me to chase the time since he doesn’t have the biggest gallop. You always have a lot of pressure when you’re riding for the team because you have to toe the line of being gutsy and taking risks, but not doing anything stupid that’s going to affect the team.”

As the leading U.S. combination after dressage, Smith of Murrieta, Calif., on Mai Baum stayed on her dressage score of 24.0 and moves into the final day of competition in third place overall.

“He and I have such a great partnership now," said Smith. "He felt strong heading towards the end. This is a hard course, especially for our horses, because the jumps aren’t that big, but the course was super technical and twisty, but he’s such a good jumper and he was right there and just on it. I have an unbelievable, magical unicorn and he’s the horse of a lifetime. He’s made a lot of dreams come true. We’ll take care of him tonight and he felt great at the end. I know his heart is as big as mine, so we’ll give everything we have until the end.” 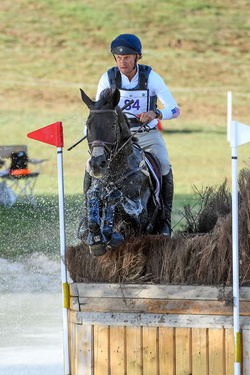 Boyd Martin on Tsetserleg (Photo by Allen MacMillan)Tackling the course after two lengthy holds, the anchor rider Boyd Martin of Cochranville, Pa., on Tsetserleg TSF, stopped the clock on the optimum time of 9:50 to stay on his dressage score of 26.2, for sixth place before Sunday's show jumping competition.

“I’d like to say I timed by round perfectly, but I really was just riding as fast as I could to get home,” said Martin. “I have to give this horse so much credit. He just tries and tries and tries. It’s his best attribute. To do as much as he’s done and continue to give everything – he’s just a legend.”

As the individual representing the United States at the world championships, Ariel Grald of Southern Pines, N.C., on Leamore Master Plan finished nearly eight seconds under the optimum time.to stay on her dressage score of 32.5 and sits in 17th overnight with one of their strongest phases remaining tomorrow.

“This is my horse’s best phase and I wanted to play it a bit safe, because he has a huge stride and can get strong, we had some mistakes early in his career where I let his stride get away from me, but he was really good," said Grald." From the slide down he was just great. I had to trust him and his carefulness and after the slide I knew we were going to be good and just let him rock on. He’s really talented in the jumping, so I’m already looking forward to tomorrow.” 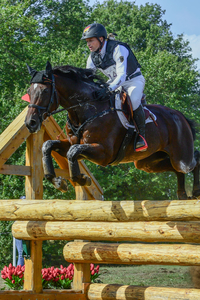 First overall Michael Jung on FischerChipmunk (Photo by Kim MacMillan)"He's an amazing horse," said Jung. "He's a machine cross country. This was a bit of a tricky course, and this horse likes a big,galloping course. I had to keep saying,`whoa, whoa, quiet,' because this course turns right, turns left. So for me, it was a not so easy course today."

"It's a great feeling to gallop into the finish with so much petrol in the tank," said Jung. "We have a great team. We are all well prepared."

"The course rode pretty much to plan," said Auffarth. "But at the last water, I had planned to do four strides, but he was so steep into the water, so I did five."

The Second Horse Inspection will begin at 9:00 a.m., 3 a.m. ET, Sunday morning before the final phase of competition begins at 11:30 a.m, 5:30 a.m. ET, which will determine team champions, followed by the top 25 individuals show jumping at 8:30 am ET to decide individual world champions.