Laura Chapot won the $5,000 Speed Stake on Calafornia at the Devon Fall Classic

DEVON, Pa.--Laura Chapot on Calafornia finished just 4/10s of a second ahead of Devin Ryan on Askalitta SBKZ to win the $5,000 Speed Stake at the Devon Fall Classic on Friday evening Sept.16. 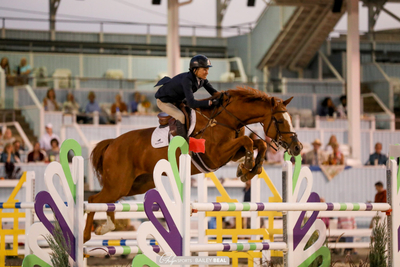 Laura Chapot on Calafornia (Photo by Bailey Beal)A field of 29 competed over the course designed by Manuel Espara of Mexico.

Chapot mounted Calafornia in the ring, as he's a little difficult, and she finished clean in 65.896 seconds.

“It’s really exciting," said Chapot. "Calafornia really enjoys the speed classes, and I thought he was really perfect tonight. He was right there with me every step of the way and I just stuck with my plan all the way around. Fortunately I was able to hold off everyone else and was able to finish on top.”

“I think the course was just right," she said. "It was difficult enough that you really had to think about jumping clear so it wasn’t just a race as to who was going to be the fastest. In the end, you really did have to put in a good, solid, clear and fast round. Sometimes when it’s a Table III, it can be super crazy and you have to take a lot of risks, and I think the course really lent itself very nice preparation for some of those horses that are going tomorrow night.”

“DEVON IS always great," said Chapot "We had a nice crowd tonight. They are always very knowledgeable and very supportive so it’s always a lot of fun being back at Devon.”

Prior to the $5,000 Speed Stake, the High Junior Amateurs took center stage in the Dixon Oval.