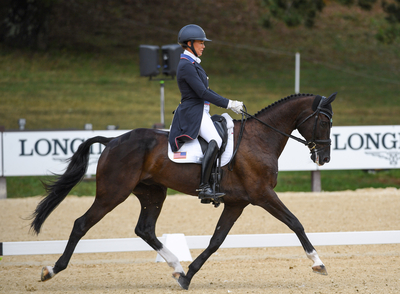 Smith on Mai Baum scored 24.0 to stand fifth individually, with Boyd Martin and Tsetserleg TSF rounding out the day, earning a 26.2 from the judging panel to be 14th individually.

Will Coleman and Lauren Nicholson, who competed Thursday, are19th and 21st individually.

While attention now turns to the Giuseppe Della Chies-designed track across the hills of Pratoni, Chef d’Equipe Bobby Costello was pleased with the team’s performance at the conclusion of the first phase.

“OBVIOUSLY I’m thrilled with the last couple of days. Every single one of the riders rode up to their potential, but having said that, we have to put that out of our heads and go into cross-country like we’re a few places lower than third and not feel the pressure of where we are after the dressage,” said Costello. “We need to go out there like we have nothing to lose – ride smart, ride aggressive, and this is the time to make it happen.” 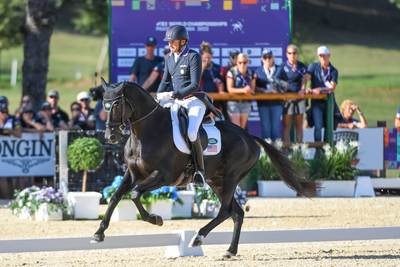 Boyd Martin on Tsetserleg (Photo by Allen MacMillan)Smith of Murrietta, Calif., overcame a bobble in their medium trot early on to receive a 24.0 from the panel, placing them in fifth individually and helping to secure the team’s current position.

“I feel like our test was better than Badminton and he’s in much better self-carriage and relaxation and most of it was all brilliant, unfortunately had that one little mistake, but you have to try and go for it and he wasn’t quite strong enough to hold it, but he tried to give me everything,” said Smith. “I’m still super ecstatic and it’s a 24 at a world championship, so I’ll take it.”

Of the cross country course, Smith said that rideability will be key and that is one of Mai Baum’s strengths.

“I think it is a rider’s type course because it’s fast, but the horses also have to be rideable and he’s all of those things," said Smith. "He’s smart and brave, so I’m really looking forward to getting out there.”

As the anchor combination, the pressure was on Martin of Cochranville, Pa., on Tsetserleg TSF in their fourth championship together, and he scored 26.2. 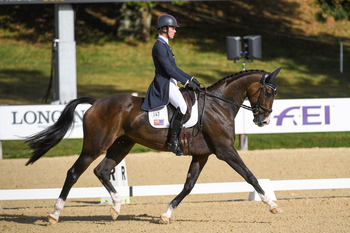 Ariel Grald on Leamore Master Plan (Photo by Allen MacMillan)Martin took a different approach with Tsetserleg TSF before this championship, focusing on lighter training to keep the gelding fresh and ready to give his all for the team this week in Italy.

“He’s such a trier this little horse and he’s so reliable in there. He was a bit quiet and backed-off, so I wish I maybe had one less ride, but that can backfire as well at these big championships if they get too nervous, so all and all I was pleased and it could have gone better, but also could have gone worse,” said Martin. “I’m pretty confident about tomorrow. It’s a testing course and at these championships is always a lot of pressure. I’m on a veteran and he’s done bigger and longer courses, so I have some comfort knowing he’s just a champion.”

As the individual combination representing the U.S., Grald on Leamore Master Plan earned a 32.4 from the judges and are looking forward to tomorrow’s gallop around the technical, yet terrain-heavy track. 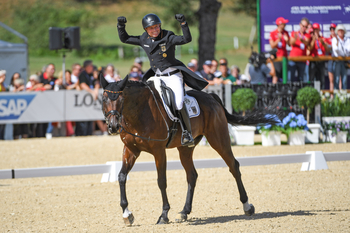 Dressage leader Michael Jung on fischerChipmunk FRH (Photo by Allen MacMillan)“Dressage isn’t always his strength because he can get very exuberant and nervous, so my main goal was to go in there and keep him with me and I think for the most part he really did that. Obviously, the competitive rider in me wants to go in there and knock it out of the park, but we are building each time and getting a little better each year,” said Grald. In her first championship. “This is amazing. It’s so easy to get laser focused and put tunnel vision on, but I’m trying to take some breaths and look around to take in where I am. I have great teammates and I am so honored to be here with all of them.”

Michael Jung of Germany on fischerChipmunk FRH leads individually on 18,8 with Laura Collett of Great Britain on London 52 second on 19.3 and Yasmin Inghamon Banzai du Loir, an individual for Great Britain,  third on 22.