U.S. a close 3rd as Coleman and Nicholson 5th and 7th for U.S. Eventing Team on First Day of Competition

PRATONI DEL VIVARO, Italy --Will Coleman and Lauren Nicholson led the way for the U.S. Eventing Team on Sept.15, the first day of dressage competition at the Eventing World Championship in Pratoni del Vivaro, Italy. 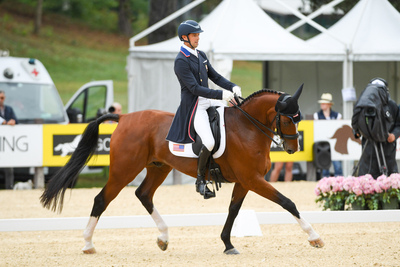 Will Coleman (Photo by Allen MacMillan)Coleman on Off The Record had a solid score of 26.4 to start the team off strong ahead of Nicholson and Vermiculus, who earned a 27.1 from the ground jury, to stand fifth and seventh individually at the conclusion of competition, with a two-ride team score of 53.5.

The second day of dressage continues tomorrow with the U.S. individual combination of Ariel Grald and Leamore Master Plan set to ride at 9:38 a.m. 3.38 a.. ET, , followed by Tamie Smith with Mai Baum at 6 a.m. ET and anchor Boyd Martin on Tsetserleg TSF scheduled to ride at 10.38 a.m.ET towards the end of the competition day.

COLEMAN ON Off The Record, a 2009 Irish Sport Horse owned by The Off The Record Syndicate, produced a mistake-free, fluid test, setting the tempo and tone for the rest of the team. 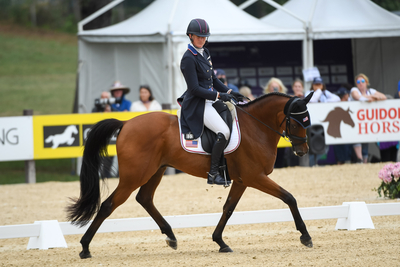 Lauren Nicholson (Photo by Allen MacMillan)In his third senior championship for the team, Coleman of Gordonsville, Va.,was pleased with the test aboard “Timmy” who is in his debut for the team this week, noting that his goal was to leave the arena with a mistake-free test with as few penalties possible.

“I thought my horse tried really hard today and I’m very proud of him,” said Coleman. "I think we squeezed every point out of it that we could, which when he came out this morning, was sort of my mentality going into today. It was a clean and relatively mistake-free test and I’m happy with that.”

As the second combination in for the team, Nicholson of The Plains, Va.,  and her longtime partner, Vermiculus, a 2007 Anglo-Arabian gelding owned by Ms. Jacqueline Mars, braved the changing weather, and were rewarded by the panel for a workmanlike and consistent test.

This is also Nicholson’s fourth senior team appearance for the U.S. Eventing Team and her second on Vermiculus.

The pair are seasoned together and have a “less is more” philosophy when it comes to preparing for championships to keep “Bug” happy, focused, and ready to work.

“He did quite well in front of the crowd, and he does love a big moment,” said Nicholson. “He’s always his best at a bigger competition, so I was happy to put down a good score for the team. That was our job, and he was just super.”

Great Britain sits in first as a team at the conclusion of day one, with two team combinations and individual combination well inside the top 10 and producing a team score of 45.5, with the team from New Zealand currently holding a 53.0 after their first two rides.