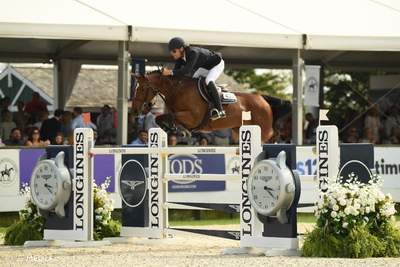 Karl Cook on Kalinka Van’t Zorgvliet (Photo by KindMedia)$5,000 was pledged to go to the Kevin Babington Foundation that supports all badly injured riders, and with nine clean in the first round, the Foundation received $45,000.

Last to go in both rounds was Karl Cook, who returned with his Grand Prix Qualifier mount, Kalinka Van’t Zorgvliet, to stop the clock in 36.710 seconds and secure his second victory at the Hampton Classic.

This was Cook’s first time at the Hampton Classic and first Five Star grand prix win.

“It’s great to be here,” he said. “I’m so glad I came here. I’m grateful to my mom, who owns the horse, and it’s just great that we’ve worked so hard with that mare, had our highs and lows, and still had everything come together.

“If you see her, she’s hot, a bit wacky, a little small, and has an inverted-type jump,” he said. “But the only reason she can do this is because she wants it. She tries so hard for it.”

Defending champion Daniel Bluman of Israel rode immediately before Cook in the jump-off, and his fast-paced time of 36.930 seconds on Gemma W eventually placed second.

“I WATCHED Karl’s ride, and he’s a deserving winner,” Bluman said. “He rode great all week and had a lot of success, and I already knew when I crossed the timers that he would beat my time. It was just a matter of if the rails stayed up or didn’t. I tried to get the crowd going to interfere with his focus, but I know Karl. He’s a winner, and I did absolutely everything I could. I’m very happy for him.”

Both riders had Katie Dinan’s time of 38.320 seconds for their target, and in the end, Dinan on Brego R’N B placed third.

“In the prize-giving with a group like this, you just feel really good about the sport,” Dinan said. “We’ve all grown up on a similar circuit, even though Karl is West Coast-based, and we all have a lot of respect for each other.

“I don’t think I would have ridden my round any differently,” she said. “That’s why I’m not kicking myself too hard. I really laid down the jump-off exactly like I planned. I came out thinking I had seven incredible horse/rider combinations behind me, and I needed a lot of luck to stay in first. My horse has a huge stride; I did all the leave-outs and made all the turns I could. He gave me everything. Having these speed demons going second-to-last and last broke my heart, but I’m still thrilled to be on the podium and just very happy with my weekend.”

This win gave Cook the win in the $30,000 Rider Challenge with a total of 330 points, with American Aaron Vale second with 300 points, while Bluman was third with 280 points.