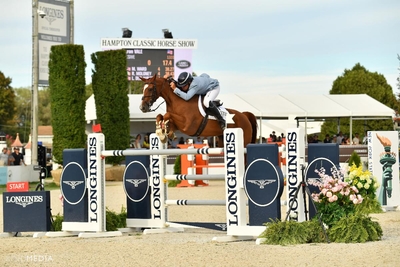 Aaron Vale on Elusive (Photo by KindMedia)Vale was one of only two clear rounds in the jump-off, finishing in 37.770 seconds to clinch the win, while Bluman was clean in the 2* Grand Prix and won the jump-off in a time of 35.790 seconds.

Of 34 competitors from nine countries, only seven made it to the jump-off in the Cup, where Katie Dinan on Atika Des Hauts Vents had the fastest time of 37.270 seconds, but wih a rail down to ultimately finish third behind second-place finisher Molly Ashe Cawley on Berdien, clean in 37.830 seconds..

“When McLain Ward put in a good round but had the last fence down, I was looking for a target to run after, and it was almost like that target had been taken away,” Vale said. “It made me think twice about how fast I could try to go. Of course, I know Molly is very fast, and Katie’s little horse is just a rocket. I wanted to be fast enough where even if I had one down, I could leave the ring on top. I had a rub at the Jaguar fence, and luckily it stayed up. Then that time held up to win the class.”

“I WAS pretty sure I didn’t have it when I finished, so I didn’t really need to look at the clock,” Cawley said. “I’m always a tenth of a second slower than Aaron is, it seems, but today was my own fault. I had a different striding down the first line than everybody else, which cost me in the end. But my mare was amazing as always. I’m very proud of her, and it’s a hard-earned second place.”

“I was super happy with my mare Atika,” Dinan said. “We don’t have that much experience at this top level together. I’ve had her since she was 7n, and this was our first year really jumping this type of class. I know how fast she is, so I just wanted to stay cool and not rush her too much. I took a shot into the double (combination) and unfortunately just had B down. After that, I thought I really had nothing to lose, and I really wanted to go as fast as I could. I’m proud of us for even having the winning time.”

Vale originally bought Elusive for his wife as a 6-year-old, and this was Elusive’s first show back after having wind surgery earlier this summer.

“We’ve had him for over six years, so we know each other very well,” Vale said. “He’s also a smaller horse, but I’d go anywhere and try to jump any course with him. He’d try it all for me. We might not get clean, but he’s going to complete anything I ask him to do. He’s just a wonderful animal and now sounds a whole lot better going around out there.”

Cawley has had Berdien since the end of the mare’s 6-year-old year.

“She really has been a steady superstar,” she said. “She tries every time out and gives 100 percent. She has to work for it a little bit, but she doesn’t mind. I think she likes to win as much as I do, and hopefully, she gets to stay with us forever.”

With this win, Vale has reclaimed the lead in the $30,000 Rider Challenge with a total of 300 points.

Amanda Derbyshire of GreatBritain stays second with 226 points,and Richie Moloney of Ireland is third with 225 points. 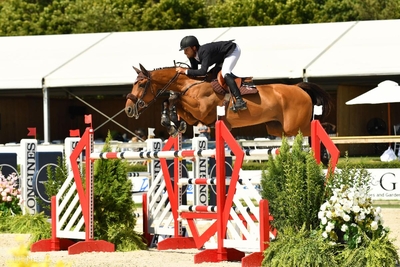 Daniel Bluman on Cachemire De Braize (Photo by KindMedia)“Cache has been with us for about three years,” Bluman said. “He came out of an auction a few years ago, and I’ve been working with him since. He’s got a lot of talent, and he’s definitely fast. He’s had almost 10 international wins. He’s a very good horse, very competitive, and has his own way of going.”

First to go clear in both the initial and jump-off rounds was Karl Cook on Fecybelle, and he set a tough time to beat at 37.300 seconds.

“We had a really good string for this class,” Bluman said. “Alan Wade of course did a good job, but we don’t expect anything less from him. It was a difficult track for the Two Star level, but Cachemire is a Five Star horse. He’s done a lot of Four Star grands prix, so he’s really at a level where he has experience and scope to spare. He gave me a really, really nice first round, then was great for the second. I knew I had to lay it out in the second round because I had some fast riders coming, and Karl had already had a good jump-off. I just focused on my plan, and it worked out.”

Finishing off the day’s jumper championships were Amy Shafmaster of Portsmouth, N.H., and her Infante SK, who earned the Medium Amateur Jumper Championship.

Quest, owned and ridden by Stephanie Danhakl of Pacific Palacades, Calif.,, won the High Score Amateur-Owner Award after winning the championship in the Amateur-Owner 3’3” Hunter, 18-35 division with 42 points.