Victoria Heurtematte wins at the Hampton Classic, McLain Ward back in lead for Rider Challenge 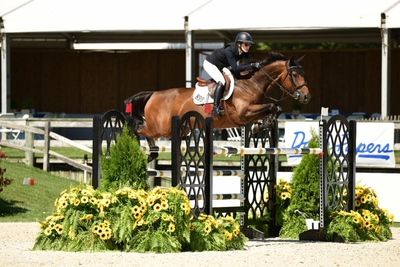 Victoria Heurtematte on Scarlett Du Sart Z (Photo by KindMedia)“This was my first time at the Hampton Classic and my first FEI win, so it’s very exciting,” Heurtematte said. “I’ve only had Scarlett for three or four months, so she’s pretty new. I’m still getting to know her, but she’s very fast. I think the course was great for us.”

For the first FEI competition of the week, Ireland’s Alan Wade designed a course for a field of 40 competitors from 10 countries.

Heurtematte’s position at fourth-to-last in the order allowed her time to watch her competitors’ rounds.

“I was very lucky to go later in the class because I could see what the others were doing,” Heurtematte said. “We had a good plan by the time I went in, and it really worked out. My mare is just awesome. Since we’ve been together, she’s been great. We went to Bolivarian Games in Colombia in June and finished eighth in the final, and she had a good rest before we came here. She’s just been incredible.”

Vale on I.Adermie R 4 was second in a time of 31.140 seconds, while Bloomberg stopped the clock in 31.880 seconds on Sempa Fidelis.

McLain Ward  reclaimed his top spot in the $30,000 Rider Challenge following Thursday morning’s featured event with a total of 120 points.

Richie Moloney of Ireland moved into second with 105 points, and Alison Robitaille is third with 104 points.

Many of the top young jumpers also competed throughout the week in the 7 & Under Jumpers, where Canada’s Mario Deslauriers piloted Lisbeth to the division championship.