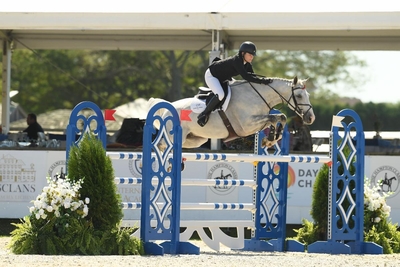 Ireland’s Alan Wade designed the course for 50 competitors with a 14-effort course for the class that Allen won with a jump-off time of 31.515 seconds.

“He’s incredible,” Allen said of her 8-year-old Dutch Warmblood gelding. “I’ve had him for about a year and a half now. He’s only 8 this year, and he just started jumping this height in June. He’s a bit inexperienced at this height, but he’s really incredible and so game. I feel like I can take a lot of chances with him like I did today. Coming off the vertical (at the top of the ring), I was just trying to get to the next oxer as quickly as I could while still coming in straight at the end. I really left out a stride and went for it, and he was really helpful to me there. I think it was his best jump of the day."

“IT'S SUCH A pleasure to be here at the Classic,” she said. “We drive up and trailer the horses ourselves, and it truly is a family operation at home. I’m really proud to win a class here because my horse has been so good the last few days, and he deserves the win today.”

Allen’s time was 1.7 seconds ahead of Adrienne Sternlicht on Lafayette Van Overis, who was second with a time of 33.298 seconds.

Moloney’s performances in the Hampton Classic’s last three Open Jumper classes have catapulted him to the top of the leaderboard in the $30,000 Rider Challenge with a total of 105 points.

Alison Robitaille maintains second place with 104 points, while McLain Ward has moved down to third with 100 points.

The Challenge will be awarded Sunday following the $410,000 Hampton Classic 5* Grand Prix.