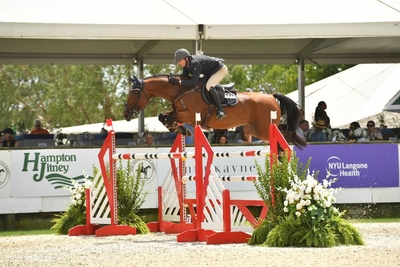 Course designer Alan Wade of Ireland tested 54 horse-and-rider combinations on Tuesday with a 14-effort competition against the clock. Although the latter half of the course proved to be the most influential in the placings, 20 competitors were able to navigate everything successfully, including the hard-to-catch Coyle and Dekato.

“I love the new footing, and I thought it was a great course today,” Coyle said. “It really suited my guy. I was able to leave out a stride from 1 to 2, then just had to keep up our momentum for the rest of the course. I also left out a stride from 3 to 4 and rode the rest for what it was. My horse is naturally fast, so as long as I stay out of the way and don’t mess him up, he’s usually right there for me.”

Junior rider Alexa Lignelli on Bankimoon finished third with a time of 62.378 seconds.

This win moved Coyle into fourth place in the $30,000 Rider Challenge with a total of 74 points.

Five-time U.S. Olympian McLain Ward remains in the lead with 100 points from Sunday’s featured class, while Alison Robitaille has edged Amanda Derbyshire of Great Britain out of second place.

Robitaille now trails Ward with 84 points after her performance in Tuesday’s $10,000 1.40m Open Jumper while Derbyshire has moved into third with 80 points from Sunday.

The Challenge will be awarded on Sept. 4 following the $410,000 Hampton Classic 5* Grand Prix.