WAYNE, Ill.--Cesar Parra on Møllegårdens Fashion led from start to finish in the Young Horse Six-Year-Old Dressage National Championship to win the title on an overall of 8.348. 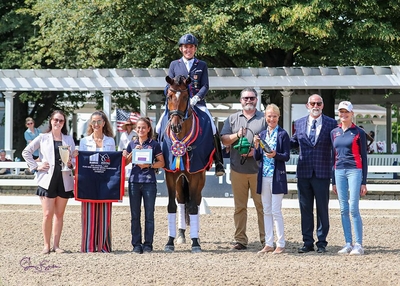 Cesar Para on Møllegårdens Fashion(Photo by Susan Stickle )Parra of Whitehouse Station, N.J., secured the championship by winning the FEI Six-Year-Old Final Test with a score of 8.30, collecting scores of 8.5 for the trot and general impression, 8.2 for the walk, 8.3 for the canter, and 8.0 for submission.

“It was great. Very relaxed. I didn't want to push for much more. He's a very powerful horse,” said Parra. “We are a little bit new to each other. I've been riding him a few months, and I know how he can get really, really strong. So, I just wanted a loose and pleasant test. I'm very, very happy that he's getting so supple. He's learning every day, he's almost doing now the Grand Prix movements, so I'm very, very happy with that.”

Rebecca Rigdon of Cardiff by the Sea, Calif., on Lionell VE scored 8.14 in the Final Test to be Reserve Champion with an overall score of 8.18.

Tarjan and Gjenganger are members of the Markel/USEF Dressage Young Horse Emerging Program.

“OBVIOUSLY this is important to come here and win if you can, but is more important to follow the parameters that we need to bring a horse to Grand Prix," said Parra. "And I think that's why we keep coming with them here. We keep coming with the same horses doing the same thing. And I think ‘Fashion’ is a statement to that, that he's doing it. He's a very, very good. I mean, I love that guy since I started showing him.”

“I'm very happy with my guy today," said Rigdon. "He was gelded last fall and needed some time to get strength and he's new to me as well since December. And I'm really, really happy with him. The one mistake he made was totally my fault, which I'm thrilled with. That I can fix easily! I'm super happy with that.”

“I’m really pleased with my horse," said Tarjan. "She was a good girl. We got through the test and she did her job.”

“My horse was super good today. He’s been super all week,” said Darnell. “I could not be more happy with how he's gone. I made a couple little rider errors in the tests today, but he just kept doing his thing. He made up for my mistakes, which is really great with a young horse like him.”

Tarjan on Jane scored 67.666 percent in the Developing Horse Grand Prix Test to be Reserve Champion with an overall score of 69.325 percent.

Marcus Orlob of Annandale, N.J., on Spirit of Joy was third in the Grand Prix Test with a score of 68.833 percent as well as third overall on a score of 68.966 percent.

All of the top three combinations are members of the Kundrun USEF Dressage Development Program.

“I got him when he was 4, and as a 5-year-old showed him in training and first level, six year old, and at the end of the year at Third Level, then just kept moving up," said Darnell. "It's just been so much fun to bring this horse up through the levels. He is so willing and so kind and the hardest trying horse I’ve ever had. The best thing about this horse is how reliable he is. I can bring him to any show anywhere and he's going to be the same. So, it's been really, really fun bringing him up through the levels. My goal for the year was just to qualify for this competition, so to come and have him win is really super, super special.”

“We'll go home and have a little break," said Darnell. "And then I think we're going to head to California for the Thermal CDIs and we'll do either two of those or a whole series. Then, we’ll head to Wellington later in the winter."

“I think the horse just needs exposure, so we will try for Dressage at Devon," said Tarjan.

“He will have a few weeks light work and then I think our home homework will start," said Orlob. "I planned earlier this season to qualify for here because I had in the winter a lot of issues with allergies and he had a long time off. There’s a lot of green stuff for him. He's only 8. So, now I think I have to push to the next level, and then hopefully in Florida starting to do the national Grand Prix.

“I loved it,” Ots said of his test. “Couldn't be better. I didn't ride him yesterday. We just took him on a hand walk and just itched him, let him roll, turn him out a little bit. So, we had a lot of power and energy. He really stayed with me, so I couldn't be happier.”

Parra on Fanta 4 finished second in the Seven-Year-Old Final Test with a score of 7.6914 and was Reserve Champion on an overall score of 7.6181.

“I enjoyed this test," said Parra. "I enjoyed it because he is a totally different horse. ‘Fanta’ until now, to me, has been a bit too quiet. And it's getting harder trying to keep him on my aids, so I rode him until the last minute I was allowed to ride to get in the ring, but I was happy he came out good and the judges liked it. He is an amazing horse. I really love him. I mean, I've been riding him now for like two years and really in love with him."