WAYNE, Ill.-- Adrienne Lyle, who was the top competitor for the U.S. at the recent Dressage World Championships, placing sixth in the Individual Freestyle finals, has both the 4-year-old and the 5-year-old national champions, boding well for her future competitiveness, and Alice Tarjan rode the reserve champions in both divisions. 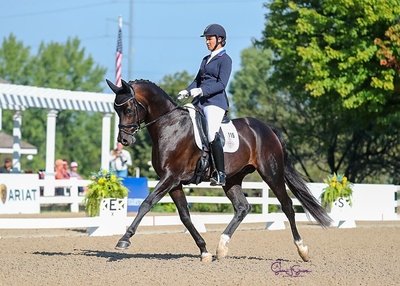 Lyle of Wellington, Fla., on Betsy Juliano's Hanoverian stallion put in a beautiful performance to earn scores of 9.5 for the trot, 8.6 for the walk, 9.2 for the canter, 9 for submissiveness, and 9.4 for general impression for an overall score of 9.292.

“I was really thrilled with him today. He was still full of energy today, which I was happy to see,” said Lyle. “He was quite frisky today in the warmup and a little bit going around outside. But then he really focused when we went down centerline. I thought I had him even a bit better balanced and more packaged than the first day and he's just really rideable. He has such incredible suppleness, especially for a 4-year-old. He just feels like every part of him moves, and I love that feeling. For me, suppleness is kind of my most important thing that I look for in a young horse. And he's got an amazing brain.”

TARJAN of Oldwick, N.J., on Ice Princess, her Oldenburg mare, was Reserve Champion with an overall score of 8.976. 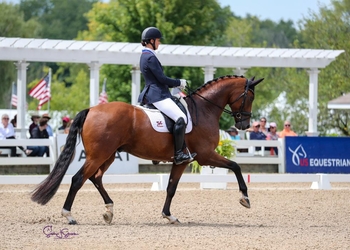 Adrienne Lyle on Valor (Photo by Susan Stickle)“I’m super excited about that horse," said Tarjan. "I think it’s going to be a fantastic grand prix horse. I bought it as a yearling from my friend over in Denmark. She’s not an amateur horse, I would say. She’s super honest, but she’s hot and so she can overboil really easily, so it’s taken her a little while to gain confidence and just the basic contact and that type of thing in the movement, but I think for the future that’s going to be a fantastic horse."

Lyle put in another excellent ride on Valor in the Five-Year-Old Final Test of the Dressage National Championship to score 9.24 in the class, earning scores of 8.4 for the trot, 8.5 for the walk, 10 for the canter, 9.5 for submission, and 9.8 for general impression for an overall score of 9.248.

“He was super again in the ring today,” said Lyle. “There was a little bit more atmosphere, even more people, and more electricity. But he put his head down and went right to work. He's so rideable and such a kind, giving horse. And I think that's what I enjoy the most about him.”

Tarjan on Ierland’s Eden, her Oldenburg mare, won the FEI Five-Year-Old Final Test with a score of 9.24 to be the Reserve Champion with an overall score of 8.848.

“Valor's owned by Kylee Lourie, who supports Katie Duerrhammer and owns the horse that she just was on at the World Championships, so we all just kind of hustled back here for this," said Lyle. "We bought him off a video from Germany. He had just turned 3 and had just been started under saddle. He has been with us since then, and he's just been really fun to develop. This is my first year ever doing the young horse classes or the championships, so I'm learning a lot as I go as well and I’m very happy to be here.

“I think the balances start to shift from the USEF Four-Year-Old Test to the FEI Five-Year-Old Tests, so it is coming along," said Tarjan.”

Tarjan, riding Serenade MF, led from start to finish to win the National Championship with an overall score of 74.176 percent.

Tarjan scored 76.985 percent in the final class, the Freestyle, to win the class and secure the overall title.

“It is the second time I have ridden through the freestyle,” said Tarjan. “I didn’t practice any of the lines until yesterday. But, I think overall, the quality is getting a lot better so it is exciting for what the future holds.”

Duerrhammer of Greenwood Village, Colo., on Paxton finished second with a score of 74.980 percent in the freestyle to be Reserve Champion with an overall score of 70.597 percent.

“Keeping that hind leg underneath her and the balance uphill was a bit of a struggle, especially in the past years, so that’s getting better overall," said Tarjan. "With the energy, she kind of wants to be a show hunter, especially this year with trying to keep her in front of my leg and I could really ride her up in front of me."

“Over the week, she actually got hotter and hotter," said Tarjan. "I get on her and it’s like, ‘Whoa. This is a way different horse than what I’m used to riding.’ You almost have to turn it down now. It is exciting to finally have her breaking through that barrier. She has definitely heated up this week, which is a lot different than last year. The energy would sort of wear of by the end of the week, but now, I have to try and hold it back a little bit and keep it easy.”

“I was really, really proud of him today," said Duerrhammer. "He performed the freestyle of his ‘uncle’ Quartett, who went to Herning, freestyle to qualify. We ran it really fast at Whites Fences to get a score."

Olivia LaGoy-Weltz on Johnny Be Goode delivered another strong performance to win the final test in the Developing Horse Prix St. Georges Dressage National Championship, the Prix St. Georges Test. with a score of 72.333 percent.

LaGoy-Weltz' scores during the week clinched the National Champion title on an overall score of 73.223 percent.

“He's still new to me, and we're still learning a lot together,"said LaGoy-Weltz of Haymarket, Va. "He's still quite young, and he needs quite a few miles. But I was really pleased with how he stuck with me and did everything I asked and handled everything despite being hot. So, you can't ask for more than that. I feel like this is such a great place to develop horses. USEF does a great job and really gives it a championship atmosphere. So, it's been really awesome experience to bring a horse like him along and bring him here and start to get to know him.”

Martin Kuhn of New Berlin, Ill., on Ronin was second in the Developing Horse Prix St. Georges Test with a score of 71.333 percent and was Reserve Champion with an overall score of 71.211 percent.

"I've been riding this horse since December," said LaGoy-Weltz. "I think we've done a handful of shows. We qualified in two shows to come here. He is owned by Fritz and Claudine Kundrun, and so they just asked me to start riding him in December. They had all discussed it and Ali Brock]is a good friend of mine and also helps coach me along with Debbie McDonald. When the horse needed a change of rider, they thought that it would be a good fit to put him in training with me. So. I'm the lucky girl who got to ride him.”

“I bred Jett," said Ahl-Eckhaus. "I foaled him at my house. And I kept him in the beginning because he was really little. The saddle would slide up the withers when he was 4. But there was something about him. That’s how he got the name Jet. He used to spark around and he thought he ran the farm."