HERNING, Denmark--Sweden swept the board when Heinrik von Eckermann on King Edward won the individual gold medal to add to the team gold at the Show Jumping World Championships on Sunday, Aug. 14. 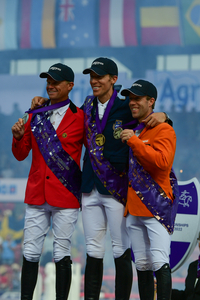 Both King Edward and Quel Homme jumped 82 fences in the five rounds without dropping a rail.

The Speed round Wednesday was followed by Team round one Thursday and Team round two Friday with a rest day Saturday followed by the two round Individual Final Sunday.

Jens Fredricson on Markan Cosmopolit of Sweden had been in second on 2.71 going into the final round but had three down to drop to 10th on 15.71, moving Guery up to second.

It was Sweden's first gold at the World Championships but it followed a team silver at the Tryon Worlds after a jump-off won by the U.S., and a team gold at the Tokyo Olympics after winning a jump-off with the U.S.

Sweden has been a dynamic powerhouse for the past four years, and the Swedish team looks extremely strong going into the Paris Olympics in two years.

Malin-Bayard-Johnsson's H&M Indian is 14, but Peder Fredricson's AllIn, who was the super star of the Tokyo Olympic will be 18 in two years, possible a little too old for yet another top effort.

Still, three of the four horses, barring injury, will be in their prime for Tokyo.

SWEDEN and the U.S. have had an historic rivalry, despite the U.S. team's failure to win this year, so, as chef d'equuipe Robert Ridland said, it's time to start another winning streak for the U.S., and Ridland is excited for the U.S. young horses and riders coming up. 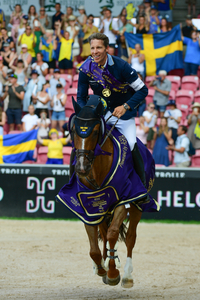 Henrik von Eckermann (Photo by Sarah Miller)"I can't believe it," said von Eckermann after his win. "Thank you King Edward, I owe you for life. Without him, I wouldn't be here."

"Thank you for all the support, but I'm very grateful the fans kept quiet," said von Eckermann. "My horse is sensitive to noise, I went in there thinking `Just clear your head and do what you walked.'"

“It a fantastic feeling," said von Eckermann. "I only concentrated on riding. The first round was super, second round as well. I needed to keep concentrating and I had a very good feeling, and I knew I could not afford a fault if I wanted the gold. I have prepared for this for so many years now and to receive this medal was fantastic. King Edward is the world’s best horse, but it is still so easy to make mistakes.

“It feels amazing," said Gueery..". My horse deserves it, it is nice to bring a medal home. It means a lot to get an individual medal, but my team deserved to get one too. The Swedish are amazing, and we knew it before we came here.
My dream to come back with a medal came true. We have a fantastic team here and my horse has developed so nicely to a new level since the Olympics and was really fantastic.”

After going clean in the Final, Guery pointed down at his horse as the crowd roared in appreciation, and he leaned over and hugged Quel Homme's neck, and then hugged him again after a few strides.

“Friday, I made a little rider mistake," said van der Vleuten. "My horse deserves the medal, and I had two amazing rounds. It gives pressure on the last riders with my two clear rounds – and the luck was on my side today.” 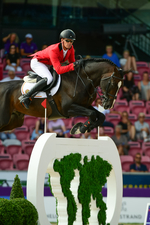 Fredricson's horse Cosmopolit began at a riding school in Sweden, so, as the announcer pointed out, he'd been ridden by a lot of people so had a lot of fans.

Foster was the only North American to make the Finals.

"I’m thrilled with him,” said Foster, currently the highest ranked female rider in the world, in praise of Figor “We’ve never been in this sort of situation before. I was too deep to the triple bar, and I think he was getting a little strong and I was thinking about the time. The jumps were big, and I have to learn how to give him more space as the jumps get going. This has been such a great experience and I’m so proud of him. I loved my horse before, but I love him even more now. Everything that he did for me this week and the feeling that he gave me; that’s my number one takeaway. I’m so thrilled.”

The medal ceremony was elaborately planned. 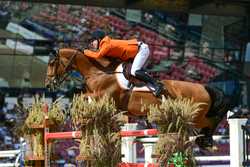 Maikel van der Vluten (Photo by Sarah Miller)First into the ring was a drummer on a black horse that carried two huge drums, one on either side of the saddle, followed by six greys going three by three and carrying riders blowing trumpets.

After the medals were awarded, a trio of metal stands behind the podium spewed fireworks into the air while the medalists sprayed each other with champagne.

King Edward was spectacular throughout, jumping brilliantly and never coming near to having a rail for his World Number One rider.