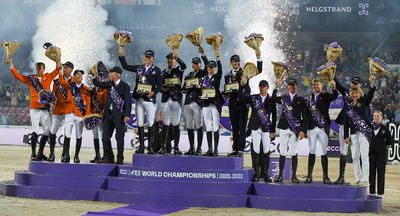 Team Podium (Photo by Sarah Miller for MacMillan Photography)Along with the 10 top teams,the top individuals also competed in the second Team Jumping, but McLain Ward and Brian Moggre both had trouble on the course and failed to qualify for the Individual Finals.

Moggre on Balou du Reventon, finished with four jumping faults and about 30 time faults after the 16-year-old stallion stopped and reared after going around the corner towards the fourth fence, which was the beginning of a long line of bending, related distances ending at fences 9 A and B.

Balou du Reventon  reared four or five times before finally agreeing to turn and go on.

He jumped the course without a rail down but of course incurred four faults for the stop plus the time faults.

“SHOW JUMPING is such an unpredictable sport," said Moggre. "I think the first three fences I might have put a little bit too much pressure on him thinking about the time allowed, and came around to fence four and in that turn he didn’t like so much pressure, and there was a miscommunication, but after that he just jumped incredible. I’d go as far to say it felt like one of the best rounds he’s ever jumped after that, so I was pleased that he finished well and we had a nice ending to the course and the week.” 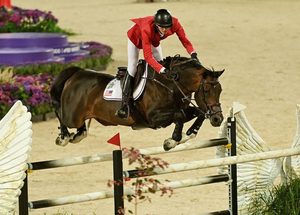 Brian Moggre (Photo by Allen MacMillan)Ward was in the hunt for an individual medal with just 3.11 faults going into the class, but Contagious had three fences down before even halfway through, and Ward pulled up.

Ward was the 25th individual to go, and it was clear from the live stream that the going had gotten very deep.

Prior to the class,  chef d'equipe Robert Ridland said that Contagious didn't like soft going.

In the first class, the Speed, Ward on Contagious went very late inn the class and Contagious had a rail down.

"Contagious likes firmer going," said Ridland. "Even if the water and roll the arena every 20 horses, the going gets very soft.  That going bothered Contagious in the Speed class. That's why I put him first to go for us in the first Team class. He was definitely a more comfortable horse going earlier in the second class." 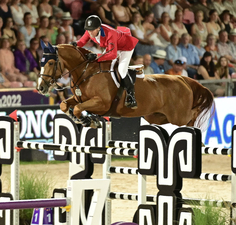 McLain Ward (Photo by Allen MacMillan)While disappointed, Ward said that the team always bounces back after difficult championships, and that will be the focus of the program over the next year and and in the lead-in to Paris.

“This horse has given so much over the last several season in making it to Tokyo last year and pulling off being a part of that medal-winning team, and I said it afterwards that was really an incredible feat, and after weeks like this you realize truly how hard it is to win those medals,” said Ward. “It was a disappointing week of results for sure, and we can’t duck that, but the young riders who were here gained a lot of miles and that will payback for us down the road.”

Interesting to note, the U.S. had the youngest team in the Championships, with three riders in their 20s, and Sweden had the oldest team, with their average age being 49.

"The good news is that both those horses are back under tack," said Ridland. "They were relatively minor injuries, but we weren't going to rush rehabilitation and risk hurting them."

The team also missed having one of the world's top riders in Kent Farrington, who has been World Number One rider.

"On the other side of the equation, Kent has a couple of very good young horses." sad Ridland. "The temptation would be to rush those horses, but we weren't going to accelerate those young horses and possibly lose then for the future." 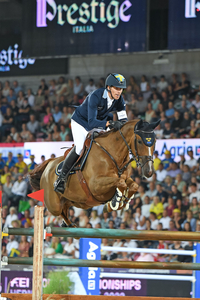 "We can qualify through placing at the Pan Am Games,"said Ridland."The Pan Ams are in November in Santiago, Chile," said Ridland. "Because of it's being so late,, I had already wanted to send a top team anyway as a dress rehearsal for Paris. The iseal would be to have a team as close as possible to the team we'd send to Paris."

Ward was already looking at other competitions and his family.

He said that his daughter, Lilly Ward, is competing in her first USEF Pony Finals and his goddaughter, Bailee McKeever, daughter of head manager Lee McKeever, is competing at the North American Youth Championships in Traverse City, Mich., so while the week has been challenging in Denmark, there are a lot of other positives for the Castle Hill team back at home and things to be proud of looking ahead.

“It’s a spectacular week to have two riders that I’ve mentored here in Denmark, and my daughter doing her first Pony Finals. She rode brilliant this week and great yesterday, and then Bailee [McKeever], my goddaughter, riding at NAYC, and sitting in fifth or sixth, so that’s spectacular, and the takeaway really for me is to celebrate the relationships we’ve built and that this story keeps going. It’s been a rough week, and a disappointing performance, but we’ve survived these kinds of weeks before and ultimately, it’s sharpened us.”

"I'm excited about the young horses we have coming up and the young riders we have," said Ridland. "We had a winning streak never done before by any country of winning the gold our home games, the Pan Am Games, the World Championships and the Olympics." 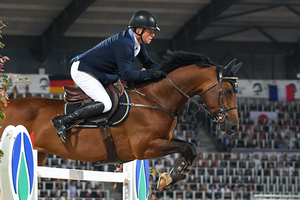 Individual 2nd so far Jens Fredricson (Photo by Sarah Miller)For a European country -the equivalent would be winning the the European Championships, the World and the Olympics, which no nation has ever done.

"We've come to the end of a winning streak, so we'll just have to start a new one,: said Ridland.

A number of top riders and countries had trouble in the Team Final.

The top three individual riders going into the class,Julie Epaillard of France, Scott Brash of Great Britain and Peder Fredricson of Sweden, had 8 faults, 8 faults and 12 faults respectively while the European Champion Andre Thieme of Germany fell off and was eliminated.

The Individual Final will have the top 25 combinations back in the main stadium on Sunday, Aug. 14, at 8:00 a.m. ET to crown the individual world champion.