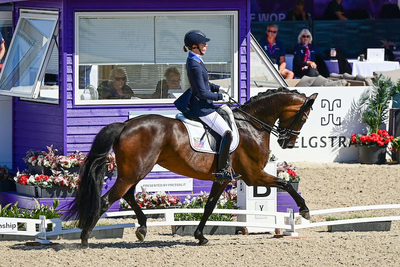 Roxanne Trunnell and Fortunato H20, the youngest horse in the entire competition, received a personal best score of 75.214 percent in Grade I.

Rebecca Hart and El Corona Texel will conclude team competition with their Grade III ride tomorrow with their ride at 6:12 a.m. ET.

Shoemaker of Wellington, Fla,) set a strong tone at the beginning of the day for the team, piloting Quiana to a personal best score of 75.415 percent in their team test.

The pair produced an energetic and forward, yet relaxed test that was well-rewarded by the judges.

IN QUIANA'S first championship appearance with Shoemaker, the 2014 Rhinelander mare has exceeded all expectations at just the start of their partnership together. 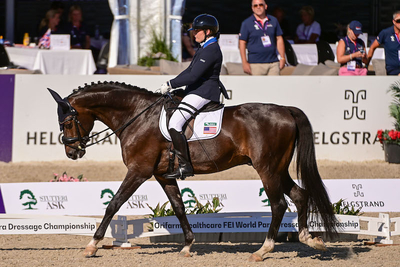 Beatrice de Lavalette (Photo by Allen MacMillan)"Today was a better day from the start. Yesterday, we gave her a rest day, and today we came out with a fresh horse and said in warm-up we were going to go for it becasue this was for the team and this is what matters," said Shoemaker. "We put our heart and soul into that ride and Q was with me every single step of the way."

In Grade II competition, Beatrice de Lavalette of Wellington, Fla., on Sixth Sense, a 2010 Oldenburg gelding owned by Elizabeth and Nicolas de Lavalette, also rode a strong team test, and improved their relaxation and fluidity together from their individual test the day prior.

With a minor equipment malfunction today with her stirrups, de Lavalette kept Sixth Sense focused and in-tune with their test and movements, which she was proud as the pair anxiously await team results.

"He stayed in the contact and stayed forward throughout the test, so I couldn't be happier or more proud of him," said de Lavalette. "We had some of our equipment break, which got him a little off balance mentally. He did all of the things he was supposed to do. Some parts were not as great, but overall I'm really pleased and looking forward to the rest of the week." 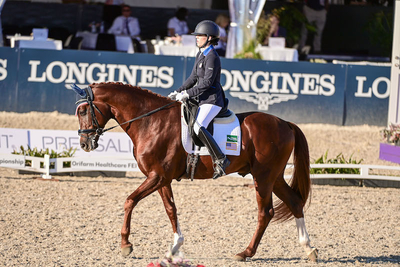 Roxanne Trunnell (Photo by Allen MacMillan)Roxanne Trunnell of Royal Palm Beach, Fla., produced one of her best tests yet aboard Fortunato H20, a 2016 Oldenburg stallion owned by Lehua Custer.

The pair rode a mistake free and beautiful test in Grade I to earn a 75.214 percent to take fourth place overall in Grade I team competition.

The pair, who just started their partnership together just over two months ago, impressed the judging panel with a soft and forward way of going, executing their movements with precision power.

"My favorite part of the test was the serpentine. We've been working on that a lot," said Trunnell. "I think the lines and bending were really good and he was more relaxed and a little less looky today. I'm very proud and happy with this boy."

Team competition will continue tomorrow for the final day, deciding overall medals, with the teams from Denmark, Germany, Great Britain, and the U.S. all vying for a podium finish.

The final combination in the for the U.S. team will be Rebecca Hart and El Corona Texel, a 2009 KWPN owned by Rowan O’Riley at 6:12 a.m. ET in Grade III competition.