HERNING, Denmark--The U.S. Jumping Team finished 11th in the first Team Competition on Thursday, Aug. 11 to miss qualifying for round two of team competition, which will be held Friday under the lights. 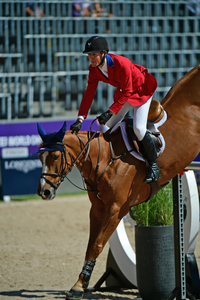 McLain Ward (Photo by Sarah Miller for MacMillan Photography)Only the top10 teams from Round I qualified to move forward to Friday's final, but there is one slightly bright side as McLain Ward on Contagious and Brian Moggre on Balou du Reventon did qualify to compete in the Team Final by finishing in the top 60 after the first two rounds of competition.

After the Team Final, the top 25 individuals will qualify for the individual Final Sunday.

Ward of Brewster, N.Y., on Contagious,went first the team and went clean well inside the time allowed of 85 seconds set by course designer Louis Konickx.

The course was set to the highest specifications, with several fences maxing out at 1.65m to1.70m in height.

The placings from the first Speed class Wednesday were converted into faults, which were added to any faults received in the first team competition Thursday.

In her second team appearance at a world championship, Adrienne Sternlicht of Greenwich, Conn. on Cristalline had a rail early in the course and added another four faults at the last oxer on course, barely tapping the front rail, for a final total of eight faults added to her score of 7.00 from the Speed class to finish on a final score of 15.

“MY PLAN was to ride a bit more aggressive than yesterday," said Sternlicht. "She has not been at this level for a while, but she was fantastic today. We are both getting used to the level again. She has been out with an injury, so all has been about her well-being, she is more than just a horse to me. I feel blessed having this opportunity again after four years out.” 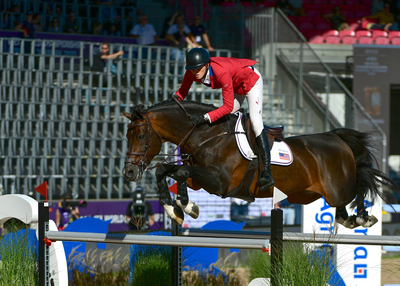 Brian Mogre (Photo bySarah Miller for MacMillan Photography)Brian Moggre ofFlower Mound, Texas had a superb round in his first team championship appearance for the team Wednesday on Balou du Reventon in the Speed and jumped a strong round today for the team, dropping just a single vertical to add four faults to his fast clear from yesterday.

“My horse felt fresh and happy today. He is such a gentle and kind stallion but turns into a complete powerhouse in the arena and takes care of me," said Moggre.

Moggre qualified 25th as an individual combination on a combined score of 6.41.

Lillie Keenan of New York, N.Y., on Argan de Beliard was the fourth and final rider for the team, adding eight jumping faults and three-time faults to finish on a total score of 11, which served as the team’s drop score.

“My horse jumped really well today," said Keenan. "For myself, I expected him to be more green. For the team it was not what I needed to, next time I need to believe in him more. It is my first Championships, and not the last, I hope that is true."

On a combined team total of 21.60 points, the team placed behind the Brazilians, who were the 10th and final qualifying placing, on a final total of 17.29. 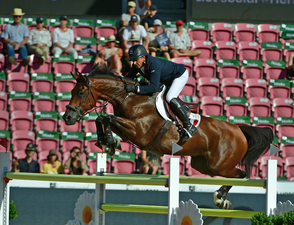 Julien Epaillard (Photo by Sarah Miller for MacMillan Photography)Sweden goes into Round II as the leading team from Round I on a team total of 3.69 faults, while France sits just on their heels with 5.44 total faults, and Germany stands third on a total of 11.76 faults.

“My horse was so fresh this morning so I wasn't in 100 percent in control despite a small jog and some flatwork this morning," said Epaillard. "I was unsure if I should go for 7 or 8 strides before the triple combination, but she was very forward so I decided to go for 7.”

The Canadians qualified for the Final in eighth.

“My horse is a bit sensitive and tend to get stressed so it could go either way, but he was so cool in this atmosphere with the audience close by and walls," said Tiffany Foster of Canada." He saved me on fence 4, after that I thought 'let's do this for him' and went for it. With a double clear, this is the first time on this level I dare to think we might have a shot against the big names.”

“My horse was just amazing in there," said Beth Underhill of Canada. "When you are in early you have a plan A and some options, but I stayed with the plan. The horse does not have much mileage but she did great. She has a strong character that really suits showjumping and loves the job. We have a fantastic team here and we will do the best for Canada.”

Round II competition will begin Friday at 3:00 p.m. ET, with Ward on Contagious going 12th in the order and Moggre on Balou du Reventon going 25th.

The top 25 riders following the conclusion of tomorrow’s competition will qualify and move forward to the Individual Final, set to start at 8:00 a.m. ET on Sunday, Aug. 14.