Adrienne Lyle finished sixth in the Freestyle at the World Championships 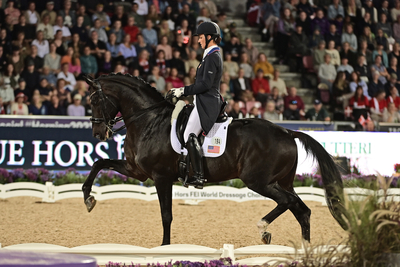 USA Adrienne Lyle on Salvino (Photo by Allen MacMillan)Lyle had qualified ninth, so she moved up three places, scoring an 83.704 percent in the competitive final competition for dressage.

Charlotte Fry of Great Britain won the gold on Glamourdale with a score of 90.654 percent, while Catherine Laudrup-Dufour of Denamrk on Vamos Amigos was silver on a 89.411 percent, and Dinja van Liere of the Netherlands on Hermes took the bronze on an 86.900 percent.

Surprisingly, as one of the U.S. Dressage Team’s most veteran athletes, Lyle has never contested a freestyle at a championship event for the United States and was excited to show off her choreography and increased degree of difficulty with Salvino, who notoriously loves showing off for a crowd, and Lyle felt the excitement and energy from the warm-up as they were preparing for their test.

“HE WAS very electric today in the warm-up," said Lyle. "This is the third time he’s been in the stadium now packed with people, and he started to realize there was a big crowd in there and had a few more nerves than we normally do, but once we got into the ring he took a breath and he knew what his job was and what he was doing and that’s what makes him such a special horse.” 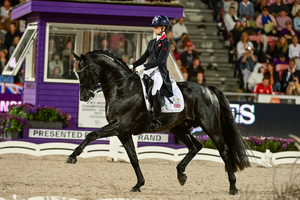 Gold Medal winner Charlotte Fry (Photo by Allen MacMillan)“We’ve added the piaffe pirouette to highlight some of the movements he does well and to bump the degree of difficulty up, and we were able to have a clean ride, so that’s huge when you have a high degree of difficulty and are flirting with that line of pushing it as far as you can, while still making it look organized and elegant,” she said. “The final centerline is always my favorite part on him. He just loves that and I was happy he was so focused through the changes and all of the canter work given how fresh and anxious he was in the warm-up and he put his head down and went to work in there.”

With the team goal of Paris 2024 qualification secured, Lyle will give Salvino a well-deserved vacation before re-evaluating their plans for 2023, which could include an appearance at the 2023 FEI Dressage World Cup Final in Omaha, Neb.

The pair have successfully completed their third championship together, and Lyle noted that she’s grateful and cherishes everyday she gets to spend with “Vinny,” and they have formed an incredibly close partnership over the past seven years.

“We have such an amazing team," she said. "I’m always blown away when I come to these championships, but how much of a village we have behind us, and we’re so incredibly fortunate to have that. We want everyone to succeed. Every day with Vinny is such a blessing. He feels great and he’ll go home and get a good break. Next year we have the World Cup Finals in our backyard in Omaha and that’s always in the back of my mind because we both love the freestyle and as long as he feels fresh and fit and wants to keep doing this, he will.”