HERNING, Denmark--Kimmy Palmer finished fifth in Female  Vaulting and the U.S. Vaulting Squad stands sixth going into the Final at the World Championships on Monday, Aug. 8 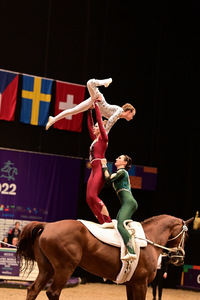 The U.S. Vaulting Squad finished their final day of squad-only competition before the Team Championship on Wednesday.

The team comprised of Calle Davis, Todd Griffiths, Miriam Griffiths, Paula Hampshire, Jaynee Meyer and Alyssa Stoddard, all of Utah, earned a team score of 7.903 in their freestyle for an overall score of 7.369 to place them sixth.

Palmer of Half Moon Bay, Calif., with a freestyle score of 8.723, was pleased with her performances throughout the week and attested her success to her partnership with Rosenstolz 99 and her lunger Laura Carramuci.

Divita of Portola Valley, Calif., was thrilled with her score, which was a personal best in both international CVI and championship competition.

"IT'S BEEN such a fun week to be here. The facility is amazing and my entire team has been great. It's been wonderful trainign with my teammates this week, both American, Danish, and Australian, and it really showcases how unified and international the vaultiing community is," said Divita. "It feels really good to produce a personal best on this final day of individaul competition. It's my horse's first season and we've grown a lot together. I'm going to keep vaulting with him moving forward and this feels like a top of the pyramid and another step in my vaulting career."

In the World Vaulting Male Championship, Daniel Janes of Moss Beach, Calif., was the only U.S. athlete to complete the competition, finishing on an overall score of 7.565 after earning a freestyle score of 7.994.

Unfortunately, due to an injury following yesterday’s technical test, Jace Brooks withdrew from competition and did not contest the freestyle.