KNOKKE, Belgium--Jessica Springsteen just missed the jump-off in the Grand Prix at Knokke when she jumped clean over a very big and difficult course but exceeded the time allowed by four-tenths of a second for 1 time fault. 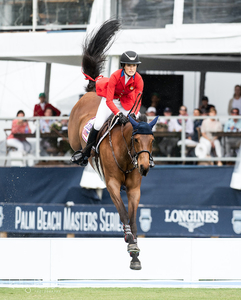 A little more than halfway through the class, there was a very long hold on course of almost a half hour, during which time the commentator kept repeating that he didn't know the cause.

When the class was about to restart, the commentator said the hold-up had been caused by an accident in the schooling area.

When two horses later Laura Kraut, scheduled to ride Confu, didn't compete, it became evident that it was Kraut who had had the accident.

"Laura had a nasty fall in the schooling area, and was taken to the hospital for x-rays," said Chef d'Equipe Robert Ridland in a text following the class. "The good news is that there is nothing broken and she has been released from the hospital...A little beat up, but she's back on her feet!"

The grandprix at Knokke was the final observation event for the 10 riders competing for one of the four spots on the team for the World Championships to be held in Herning, Denmark Aug. 6 - 14.

WITH 500,000 Euro on the line in the Grand Prix, all the top riders in the world were among the 50 starters.

Peder Fredricson of Sweden on H&M All In won with a clean round in the jump-off and a time of 44.09.

Bernardo Cardosa de Resende Alves ov Brazil on Mosito van het Hellehof was second, clean in 44.23, and the only other clean round in the jump-off, Maikel an der Vleuten of the Netherlands on Beauville Z, was third in 44.70.

Brian Moggre, who had to go just a few horses after Kraut had her bad fall in the schooling area, placed 10th with 4 faults on MTM Vivre le Reve.

The team for the World Championships will be announced next week.