LAKE PLACID, N.Y.--Jimmy Torano of Mohrsville, Pa., has made winning hunter derbies his specialty, and at Lake Placid he not only won but also placed second in the $15,000 USHJA International Hunter Derby Regional Championship North on July 10. 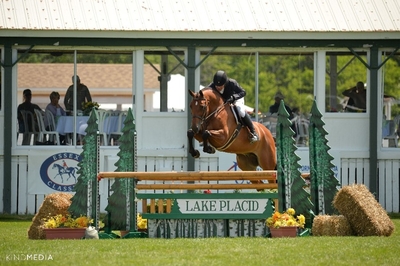 Jimmy Torano on Laskano (Photo by KindMedia)Torano rode Laskano to the win and Moonlight to second to conclude the I Love New York Horse Show, the second week of the Lake Placid Horse Shows.

The judging panels of Gary Duffy and Jamie Stryker and Tim Kees and Geof Case scored Torano and Laskano on top in both rounds, giving them a score of 179 in the Classic Round and a score of 202 in the Handy for a two-round total of 381.

“I THOUGHT my horses were both very good,” Torano said. “Management gave us a chance to get the horses in the ring this morning and allow them to get acclimated to the grass and the different surroundings, and my horses dealt with it really well. They’re both fairly well seasoned and they were both very comfortable out there."

“It’s a great class,” he said. “I’ve been blessed to have some outstanding horses to ride in this Derby and these were probably the two best I’ve had. This was a really nice way to end two great weeks here in Lake Placid.”

Torano also placed second with a total score of 375 on Moonlight while third place went to Cameron Kohls on Fubioh with a score of 361.

“It was a beautiful course with beautiful horses and some beautiful riding,” said judge Gary Duffy. “We all thought that Joe built a fabulous course and Jimmy executed it beautifully on both horses.”