Laura Chapot won the $100,000 Grand Prix at Lake Placid, only the seventh to win both

LAKE PLACID, N.Y.--Laura Chapot of Neshanic Station, .J., has had a fantastic, almost unbelievable two weeks in Lake Placid, winning every major jumper class but one, including winning both $100,000 Grand Prix. 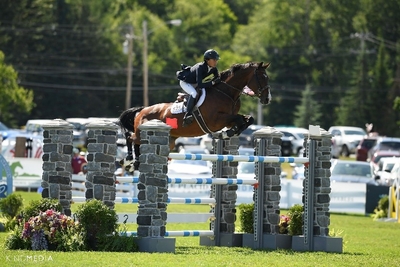 Chapot’s win made her just the seventh rider ever to sweep both Lake Placid Grand Prix in the same year.

Chapot was one of nine entries to reach the jump-off with a clean trip over the 15-effort, first-round course designed by Bernardo Costa Cabral, course designer for next year’s FEI World Cup Finals in Omaha.

First to return for the eight fence jump-off was Alex Matz of Coatesville, Pa., on Erdento Van De Leeuwerk.

Matz, who won the class last year on Davidson, set the mark to beat with a clean trip in 36.557 seconds.

Matz’s lead held through the next five rides before Chapot returned on her 12-year-old Oldenburg gelding.

She blazed to a clean ride in 35.205 seconds in what proved to be the winning ride.

MATZ'S TIME held up for second place with third going to Mattias Tromp who finished clean in 36.849 seconds on Infuria P&P.

“With that horse, I just have to keep him moving and focused on the next jump,” Chapot said. “He’s naturally a very fast horse and his turns have gotten a lot better. We’ve developed a very good level of trust between the two of us and I can be very patient at the jump. As long as I know he’s looking at the jump, then I know he tries his best.

“All of our horses love this field, and it is so great that we get to come up here each year,” she said. “It’s always the best two weeks of our summer!”

With her win on Chandon Blue in the first week’s $100,000 Grand Prix, Chapot joined a select group of riders to sweep both Lake Placid Grand Prix in the same year.

This was also Chapot's seventh win in a grand prix atLake Placid.

Following her win, Chapot was honored with the Richard & Diana Feldman Perpetual Trophy for Excellence, awarded to the rider with the most combined money won in Lake Placid’s two Grand Prix.

Prior to the Grand Prix, Michael Desiderio rode Sterrehof’s Edinus to the win in the $20,000 1.40m Stake.

Desiderio was one of 12 entries to reach the jump-off, and he won with the fastest clean ride in the jump-off, finishing in 30.295 seconds.

Riding last of the eight in the jump-off, Rizvi knew she had to beat the very fast time of 31.852 seconds turned in by Hailey Royce on Sonic Boom.

Completing North Run’s sweep of the top three places was Alexander Alston who finished third with a time of 32.188 seconds on Prestigious.

Alex Matz wasn't the only successful member of the family that comes by its talent naturally, with father Michael having been a highly successful grand prix rider and mother DD also a top rider, with a gold medalfrom the Pan Am Games.

In the $7,500 Medium Junior/Amateur Jumper Classic, Robert Matz won on Stalando with two clean rounds and the fastest jump-off time of 36.094 seconds.

Kathryn McCarthy was second with a time of 36.456 seconds on Carramar C, and third went to Amy Shafmaster who finished in 36.287 seconds on Infante SK.