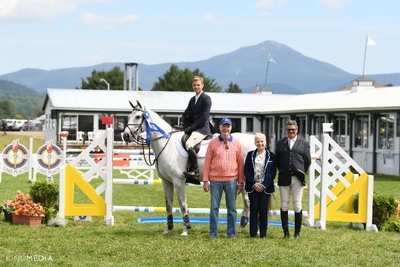 Alex Matz at the presentationMatz also placed second in a $1,500 class, and Chapot also placed third in a $5,000 class.

Matz was one of seven entries to go clean over the one-round course designed by Bernardo Costa Cabral, course designer for next year’s FEI World Cup Finals in Omaha.

He won with a clean round in the fastest time of 55.939 seconds.

Placing second was Christian Coyle, who finished with a clean ride in 57.896 seconds on Heviola, while third went to Chapot who was clean in 58.180 seconds on Gideon.

CONTINUING her streak of at least one win each day in the Richard M. Feldman Grand Prix Field, Chapot won the $5,000 1.25m Jumper Classic.

She rode Ciego to two clean rounds and the fastest jump-off time of 35.130 seconds for the win.

Placing second with a clean jump-off ride in 37.588 seconds on Califa was Christian Currey, while third went to Heather Caristo-Williams who finished the jump-off clean in 38.975 seconds on Gina Bella.

McGuigan had the fastest clean ride over the one-round course, finishing in 57.485 seconds for the win.

Matz placed second with a clean ride in 59.313 seconds on GK Finette, while third went to B. J. Ehrhardt who finished clean in 64.489 seconds on Cornet’s Darkside.