KNOKKE-HEIST, Belgium--Brian Moggre was the star of the U.S. Jumping Team that finished eighth overall in the FEI Jumping Nations Cup of Knokke Hippique CSIO5* on July 8. 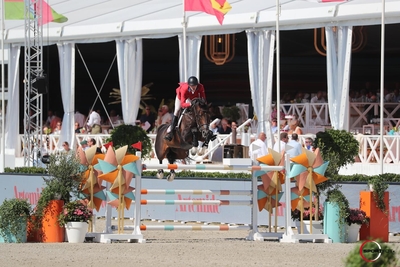 Brian Moggre on Balou du Reventon (Photo by Sportfot)The team of Bliss Heers, Michael Hughes, Brian Moggre and Jessica Springsteen, led by Chef d’Equipe Robert Ridland, was competitive after the first round, but two riders had 12 faults each in the second round to drop the team to eighth on a final total of 28..

“Despite our overall results not being what we had hoped for, there were some bright spots, nevertheless, including Brian’s two solid rounds in the anchor position,” said Ridland. “Most importantly, the primary purpose of these 5* competitions over the past two weeks is to put the finishing touches on the selection and preparation process for the upcoming World Championships in Denmark.”

GOING FIRST for the team and third overall in the class was Jessica Springsteen of Colts Neck, N.J., on RMF Zecilie.

Nine teams, including most of the top riders in the world, competed over he 1.60m track set by Uliano Vezzani of Italy at the Knokke (pronounced Kenock) Hippique venue on the picturesque coast of Knokke-Heist, Belgium.

Springsteen has a good first round, dropping just a single rail and finishing within the time allowed of 79 seconds, stopping the timers in 78.19 seconds, to start the team off well early in the day.

The second for the U.S. was Heers of Las Vegas, Nev., on Antidote de Mars, who blazed around the challenging track, crossing through the timers in 75.64 seconds, but added four faults to their score, with the team moving forward to the second round on a minimum score of four, but still competitive with the rest of the field.

In his first team debut in 2022 for the U.S. Jumping Team, Hughes of Franklin Lakes, N.J., on Kashmir Van d’Oude Pastory had 10 faults for the drop score.

Moggre of Flower Mound, Texas on Balou du Reventon delivered the team’s first clear effort of the day to help the team move forward to the second round on a total of eight faults.

After the first round, three teams, France, Sweden and Belgium led on 4 faults, with the U.S. and the Netherlands with 8, Ireland with 9 and Germany and Brazil with 12, while Italy, with 16 faults, didn't qualify for the second round.

Springsteen had 12 faults in the second round tour of the course, with three rails down late in their round after the technical triple combination.

Hughes improved on his first round score, with a rail late in the course for 4 faults

Moggre had a foot on the tape over  the water for 4 faults but left all the jumps up in their second round.

Ultimately, the team finished on a final total of 28 faults, the same as a German team but witha slower aggregate time for eighth place.

In a very unusual finish,, four teams, Netherlands, France, Belgium and Sweden tied for the win with 8 faults each, so there was a jump-off, with each team choosing one rider to go against the clock for the win.

Going first in the jump-off, Marc Houtzager of Netherlands on Sterrehof's Dante N.O.P. had 8 faults in 38.74, followed by Julien Epaillard of France on Caracole de La Roque, who was clean in a very fast time of 33.89.

Jos Verlooy of Belguim on Igor had 4 faults in 34,68, and Henrik Von Eckermann for Sweden on King Edward was clean but couldn't catch Epaillard's time, finishing in 34.62 for second.