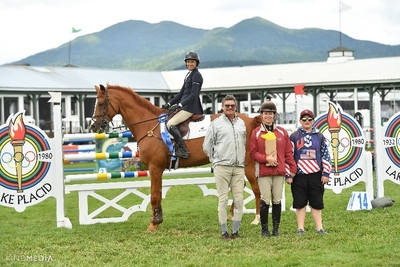 Laura Chapot on Calafornia (Photo by KindMedia)Chapot rode two of the eight entries who reached the jump-off by going clean over the first-round course designed by Bernardo Costa Cabral, course designer for next year’s FEI World Cup Finals in Omaha.

Third went to Gracie Allen who had a clean jump-off ride in 35.021 seconds on Jelster Van Stal Romano.

She was one of four entries to go clean in the first round and then had the fastest clean jump-off round, finishing with a time of 41.251 seconds to win.

Riding Sterrehof’s Edinus, Desiderio was one of six starters to go clean over the one-round course designed by Cabral, and he won with the fastest time of 61.656 seconds.

The others who turned in clean rounds were Nicky Galligan on Hermione De L’Holdez, who finished second with a clean round in 63.301.

Linda Sheridan on Vantina HPF  was third, clean in 63.945, Peter Leone on A Walk in the Park was fourth in 65.594, Galligan on Javas Miss Jordan was also fifth in 69.39,  and McLain Ward, just back from CHIO Aachen where was named Leading Rider, on Quinn was sixth in 74.790.