FAR HILLS, N.J.--Isabelle Bosley of Monkton, Md., on Paper Doll won the $10,000 Open Preliminary division after finishing on their dressage score of 22.1 at the Essex Horse Trials. 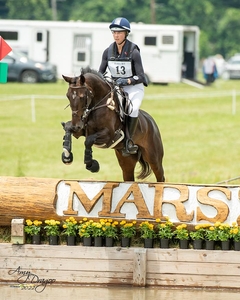 Isabelle Bosley on Paper Doll (Photo by Amy Dragoo)The two-day event was held July 1-2 with dressage and show jumping at Hamilton Farm, home of the U.S. Equestrian Team Foundation in Gladstone, and the cross-country at Moorland Farm in Far Hills.

Bosley, 25, has been developing Paper Doll slowly over the last three seasons under the watchful eye of Lillian Heard.

“She’s a very careful jumper, so we didn’t want to scare her by moving up too fast,” Bosley said. “She’s really come around, and she’s an awesome Prelim horse. I’m hoping to move her up again soon.

“She’s a pretty bold cross-country horse,” Bosley said. “I’ve run a lot of Prelim events with her at this point, and we had seen a lot of things on today’s course before. I knew that as long as I stuck to my plan for our ride, everything should be alright. I did think she might refuse the jump into the water because that’s the biggest drop into water she’s done so far, but she jumped it really nice and carefully. I’m really thrilled with how she took it all on, especially in the heat. She just motored around the course like it was nothing.”

Along with Paper Doll, Bosley has a 4 Star horse, Night Quality, with which she has been slowly building up her career.

THREE YEARS ago, she and Night Quality were fourth place in the Essex Horse Trials Preliminary division despite running in that year’s deep mud.

They were most recently in England on a U25 Nations Cup run, with Bosley continuing to seek out the horses, results, and experience she needs to make it to the top of the sport.

“I love the Essex Horse Trials,” Bosley said. “This year, the course was so fun. We just got out there and onto a rhythm, so while there were some technical questions, it wasn’t overly difficult. It was a really great course for all the horses, especially after the dressage and stadium tests at such a nice venue yesterday.

“For Paper Doll, I personally wanted to bring her here because there’s a bit more atmosphere,” she said. “Sometimes it can be really tough to get in the ring with a big crowd and go around the cross-country with all the spectators, but I think it’s such good exposure for the horses. It was also my first time at the USET stables, and I thought it was so cool to come and see them. It was so nice to get such good footing for dressage, a lovely Grand Prix ring for show jumping, and then an awesome cross-country course here in Far Hills.”