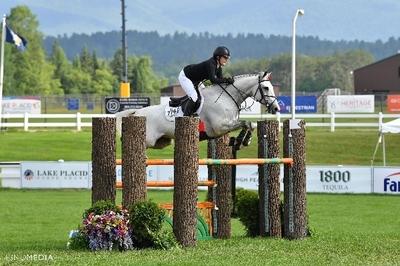 Gracie Allen on Jeister Van Stal Romano (Photo by KindMedia)Allen was one of four entries who qualified for the jump-off by riding clean over the 14-effort, first-round course designed by Nick Granat.

She then set the mark to beat by turning in another clean round over the seven-effort tiebreaker course finishing in a time of 32.268 seconds.

The next two entries couldn’t beat her score and that left it to the final entry, Laura Chapot on Gideon, winner of two feature classes earlier in the week.

Chapot rode Gideon to another clean ride, but her time of 33.254 seconds was just a bit slower, leaving her in second place.

Hurter topped a field of 40 entries with two clean rides and a jump-off time of 29.913 seconds.

Placing second with two clean rides and a jump-off time of 31.389 seconds was Madison Smyth on Casper 389, and third went to Maria Mendelsohn who finished in 32.010 seconds on Editha Dymara.

Pilla beat a 28-horse field with two clean rounds and a jump-off time of 27.230 seconds to edge Kathryn McCarthy, who finished the jump-off clean in 27.822 seconds on Cody 131, and Christian Currey, who had a time of 28.252 seconds on Califa.