AACHEN, Germany --The U.S. Eventing Team finished fifth overall after two days of competition at CHIO Aachen in the SAP CCIO4*-S, finishing on a final team score of 158.4 penalties. 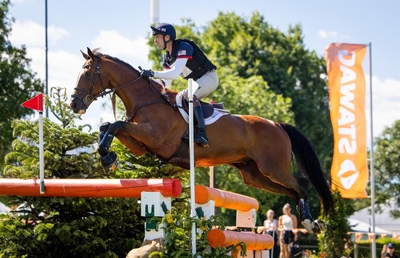 Will Coleman on Off The Record (Photo by Taylor Pence)The team was led by Chef d’Equipe Bobby Costello.

The team had been third following the dressae and show jumping phases but dropped to fifth after cross country.

“There were some really good moments for us to take away from this competition as a team and as individuals,” said Costello. “I was pleased with how some of the pieces came together, but I also don’t believe any of us feel satisfied with the overall result and are going to look to continue improving and delivering better results for our program and our country, especially as we get closer to September and the World Championships. I would like to thank the athletes, owners and support crew for their genuine dedication and hard work over the past few days.”

Will Coleman of Gordonsville, Va., on Off The Record was first for the U.S. in cross country.

THE COURSE that was designed by Rüdiger Schwarz of Germany featured 34 jumping efforts in total with an optimum time of seven minutes.

Coleman and Off The Record tackled the many difficult questions and combinations on course with ease, ultimately crossing through the finish with just two time faults to add to complete on a final score of 34.50, finishing as the highest-placed U.S. combination in sixth place overall.

Will also rode Chin Tonic HS to another top 10 finish, securing10nth overall in their first apperance together at CHIO Aachen.

Next for the U.S. was Sydney Elliott  of Bossier City, La.,on QC Diamantaire.

He finished as the second-highest U.S. team combination in 17th place after adding 7.60-time faults to his overnight score of 41.6 to complete on a 49.20.

Both Meghan O’Donoghue of Round Hill, Va., on Palm Crescent and Buck Davidson of Unionville, Pa.,, on Carlevo fell victim to runouts around the difficult track and terrain, with O’Donoghue adding 64.4 penalties for a final score of 97.20, and Davidson completing with 44.80 additional penalties to finish on 74.70.

On the first day, Elliott scored 32.40 in dressage to finish in 28th place at the conclusion of the first phase.

In her first appearance for the Eventing Team, O’Donoghue had one of best tests at the CCI4* level, earning a 31.60.

Davidson broke the 70 percent mark, and finished his first phase on a score of 29.90 for 15th place overall after dressage.

Coleman on Off The Record, last year’s winners of the SAP Cup CCIO4*-S, laid down a strong test, impressing the judges and moving forward to the evening’s jumping on a 28.50 in ninth place overall.

O’Donoghue finished with just 1.2 time and moved up to 15th overall.

Davidson made a significant jump up the leaderboard after securing the only double clear effort of the day for the team to finish on 29.90.

Coleman on Off The Record added just a single rail to his score, adding four faults to their dressage score of 28.50 for a total two-phase score of 32.50.