AACHEN, Germany--On Wednesday, McLain Ward was delighted that after 27 years he had finally claimed the golden ribbon in the Turkish Airlines – Prize of Europe. 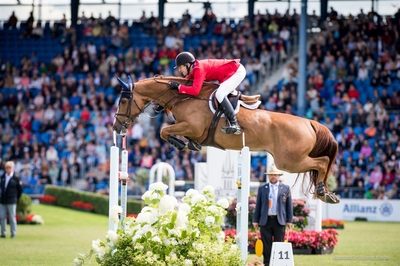 McLain Ward on Contagious with the Aachen crowd in the background (Photo by Shannon Brinkman)Then on Friday, July 1, he added a further victory to the list in the RWE Prize of North Rhine-Westphalia on Contagious.

It was fantastic to watch how Ward and his 13-year-old Zweibrücker gelding, Contagious by Contagio, sped through the course in the jump-off of the RWE Prize of North-Rhine Westphalia as the last pair to go.

Even in the tight turns they managed to find the perfect take-off at the obstacles and crossed the finish line in an incredible 41.70 seconds to take the victory.

Ward’s recipe for success? “I know the exact numbers of my strides and I know my horse inside out.”

“I knew the numbers a little bit and my horse can cover the ground pretty well, and I knew the number of strides I could do in this jump-off,” said Ward. "It was very clear ,and the fourth oxer showed up very good for me and the green oxer on the double I did on a slice and I could have made up some time there."

“CONTAGIOUS has just really been with me for a while and particularly zeroing in on this event," said Ward. "Before last year, I never thought of the horse as an Olympic horse and then he went to the Olympics last year and performed at that level beautifully and he came out of the Olympics as a better horse, a more confident, bolder, stronger horse in that sense and he’s really on a roll and in really good form.”

"This was the hardest course we've seen all year," said chef d'equipe Robert Ridland. "All the best riders in the world are here. McLain left it scorched earth in both Wednesday's and Friday's classes. He left nothing to chance.It was such a masterpiece."

"He didn't just leave strides out, he shaved tenths of seconds off with shaving the turns," said Ridland. "These two classes he won are the two major classes of the show other than the grand prix. I doubt that it has ever been done that the same horse won both classes. It's huge crowds, and the crowd is so knowledgeable. They're for anyone who turns in a top ride. This is sport at its best."

Up until Ward's ride, Steve Guerdat of Switzerland on his 11-year-old Swedish-bred team European Champion, Albführen’s Maddox, had been in the lead on a time of 42.38 seconds after an impressive round in which both horse and rider went flat out.

Guerdat reported later that this was the first big class for the gelding after a two-month break and Maddox had been slightly nervous.

“I had to fight a little bit, but he fought with me," said Guerdat. "It was a real pleasure for me today! I could perhaps have done one stride less at the third jump, but it wouldn’t have changed anything. We had a bit of bad luck today because we had to compete against McLain, and he is the guy to beat in such classes. I was happy with my ride and horse.“

Jur Vrieling from the Netherlands was third onthe eleven-year-old Plot Blue son, Fiumicino van de Kalevallai, with a clear round in 42.79 seconds.

The pair have already been together for a long time, but Vrieling said, “coming under the top three in a class of this magnitude is one of his best achievements to-date.”

In view of the fact that 16 of the in total 54 competitors reached the jump-off, the team World Champion of 2014 said: “The fences were high and wide, there was a water jump and both Liverpools. The course contained all possible challenges. I didn’t expect there to be so many clear rounds. But that shows the quality of the horses and riders here.”

“When you start to see things like the double liverpool it starts to catch your attention," said Ward.    'I think the number of clear rounds both over the course today and on Wednesday shows how many horses and riders are focused on this event and the quality of the ground and that the horses are jumping great on this surface.”

In spite of the fact that Contagious won both the Turkish Airlines – Prize of Europa and the RWE Prize of North Rhine-Westphalia, Ward will be ridling a different horse for the Grand Prix on Sunday: His long-time, top partner, HH Azur.

“She is like an old friend," said Ward. "We know what to do. We will just try to focus and do our best on the day.”

Jumping competition will continue tomorrow with the FEI Youth Equestrian Games Individual Final at 1:15 p.m. The Allianz-Prize will begin at 3:30 p.m. and the Sparkassen-Youngsters Cup Final at 7:00 p.m.