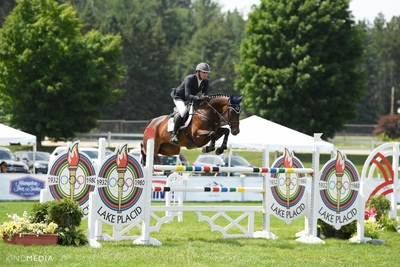 Christian Coyle on Coco Mercedes (Photo by KindMedia)One of the premier stops on the nation’s hunter-jumper horse show circuit, the Lake Placid Horse Shows run June 28-July 10, offering a full schedule of world-class competition with more than $600,000 in prize money.

Coyle was one of four entries that went clean over the 15-effort, first-round course designed by Nick Granat.

Mattias Tromp was first to return for the seven-effort tiebreaker course, and he set the mark to beat with a clean ride in 30.184 seconds on Infuria P&P.

Anthony returned on her second mount, Jet Blue, but settled for fourth behind Coyle, Tromp and her first mount.

“SHE'S JUST naturally fast,” Coyle said of his mare. “I actually did the same numbers on the first line, and then it was pretty neat back to the in-and-out, but my horse is just a little faster. I love it here in Lake Placid. Last year was my first year here and I love it. The ground is fantastic and my horses jump really well.”

Sheridan was one of five entries to reach the jump-off, and her clean jump-off ride in 21.184 seconds gave her the win over Doug King of Malvern, Pa., who was second with a jump-off time of 21.443 seconds on Main Line Girl and Jimmy Torano of Mohrsville, Pa.,