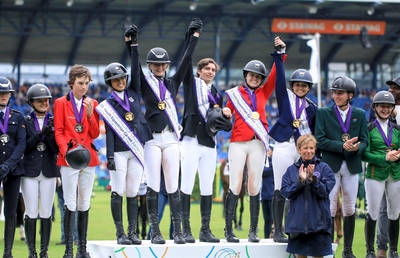 The team was led by Chef d’Equipe DiAnn Langer, and the riders will return to contest the FEI Youth Equestrian Games Individual Final on Saturday, July 2.

Gochman on Merino van de Achterhoek had two lovely clear rounds in the main stadium at Aachen over the two days of competition and and then rode in the jump-off to break the three-way tie for first after two rounds.

The courses were designed by Frank Rothenberg of Germany and showcased the talent of riders aged 15 to 18 from around the world.

THE RIDERS competed at 1.20m height in team competition on borrowed horses, with the Individual Final to be set at a maximum height of 1.30m.

Each team had five riders and allowed for two drop scores to calculate the team’s final score.

She jumped clear in the fastest time of 32.26 seconds to claim the victory for her team.

She also jumped clear but took fractionally longer to finish the course in 32.59.

Riding for Morocco, Jad Guerraoui also put in a clear round with Lady Angeles – but with a time of just over 33 seconds, which meant bronze for Africa.

“For me as the Youth Chef d’Equipe & Technical Advisor, I’m always looking for these opportunities for our youth in the U.S. for a bigger vision of what’s out there. A bigger of vision of where they’re going, what it takes to get there, how long it actually takes to get there – it isn’t overnight success and these competitions ask if they are willing to dig in and commit to the long haul,” said DiAnn Langer, Chef d’Equipe of the North American Team and Youth Chef d’Equipe & Technical Advisor for the U.S. Jumping program. “These opportunities tie it together for me in terms of the pathway and when you look at where our up-and-coming senior team athletes are now, they were on our youth teams, and that's what you can accomplish through hard work.”

“They really enjoyed the entire experience and it’s also important to stress how fabulous the selection of horses was for this competition and the trust of the owners in Holger Hetzel and his program that they would take care of these horses and ensure their safety and wellbeing," said Langer. "They were very strict with the schedule and our team, and all the riders had to learn those rules. There was no bonding with the horses other than through your riding and I think that’s an important of this competition. The horses were so well-managed, and the quality was just unbelievable, and they were completely qualified and excellent and it’s important to recognize the work that goes in behind-the-scenes to provide this type of opportunity for our international youth athletes.”

Of the experience, Gochman noted the importance of understanding and respecting different riding techniques and skills from around the world and touched on the horsemanship and knowledge she’ll take away from the competition after competing on a borrowed horse.

Gochman was selected through an application process where her certificate of capability was earned through top finishes in CSI2* Grand Prixs and in FEI Under 25 Grand Prix classes during the 2022 competition year.

“One of my biggest takeaways so far from this entire experience is how to learn from other people. I think that’s a huge part of our sport. A lot of these people are coming from new nations and ones that I haven’t ridden with before that I wouldn’t have met and I think it’s a great experience for learning,” said Gochman. “We had to be on time for ourselves and each other, learn how to communicate with other people like owners, grooms, our teammates, and make sure that everyone’s included. It’s the perfect balance of having fun and meeting new people, but also being serious with your goals in competition as a team and as an individual.”

Participants from 30 different countries around the world were invited to compete in the championship and Gochman discussed the uniqueness of meeting her teammates last week and coming together for a common goal, as well as the experience of learning to ride a borrowed horse in a team format competition.

“I’ve learned a lot about other people’s experiences in the sport and their perspectives, successes, and challenges, and that helps you grow as an athlete and as a friend. It’s a very individual sport, but it’s more fun when you’re a part of a team and it makes it worth it,” she said. “Being able to support everyone and be a collective is important for our generation in the sport. Also, riding a loaned horse has been very fun for me. You have to trust the horse and be confident that they know how to do their jobs and apply everything I’ve been taught and learned throughout my career so far.”