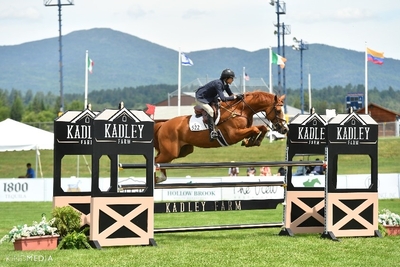 Laura Chapot on Calafornia (Photo by KindMedia)One of the premier stops on the nation’s hunter-jumper horse show circuit, the Lake Placid Horse Shows run June 28-July 10, offering a full schedule of world-class competition with more than $600,000 in prize money.

Chapot was one of nine entries to ride clean over the 1.35m first-round course designed by Nick Granat, and she won with another clean round in the jump-off in 36.105 seconds.

IN THE 1.40m class, Chapot was one of seven entries to reach the jump-off.

Her jump-off time of 37.496 seconds narrowly edged Eva Fisherman, who finished in 37.653 seconds on Casallvano.

Chapot also placed third with a time of 38.652 seconds on Diarado’s Flying Dutchman.